Justin Bieber says we can keep talking about him all we want — he doesn’t care. 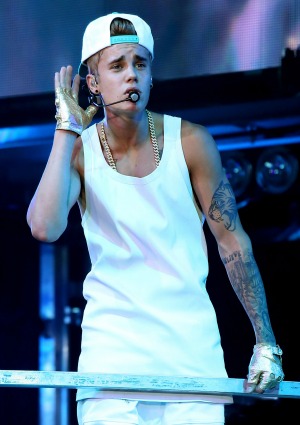 Justin Bieber says his fans care more about the daily rumors of his bad behavior than he does — and frankly, he doesn’t “give a f***” what the haters say.

In an interview with The Hollywood Reporter, the “Baby” singer explains he can’t be bothered with tabloid stories because they are all about making other people money, and he is just going to keep on being who he is.

“When people see a negative thing about me on a magazine, they’re gonna buy it,” he explained. “Every time some site writes something bad, all my followers go on there, and it brings them more traffic. Now they have all the Beliebers on their site, which gives them money from advertisers. They’re just worried about money. They don’t care about ruining someone’s name.”

Bieber’s manager, Scooter Braun, elaborated on the pitfalls of the kind of fame that no other generation has experienced before.

“He’s the only person in humanity who’s grown up the way he has — with smartphones and cameras on him 24/7,” Braun said. “Another kid can go out and have a good night on the town, and no one gives a crap, but Justin is the most Googled person on the planet — for four years straight!”

Most recently those rumors — some factual — included peeing in a bucket and disrespecting a photo of former President Bill Clinton, spending an evening in a known house of prostitution, possibly sleeping with a hooker/porn star, illegally tagging a building in South America, spitting on fans, nearly running over children in his neighborhood in his very expensive sports car and disrespecting the Argentinian flag.

“When Justin was younger, it was, ‘Keep him out of trouble, stop him from falling down, protect him as much as you can from anything that can hurt him,'” Braun explained. “When I try to do that now, he’s resentful, he pushes away and rebels. What I’ve come to learn is: Be there, give the best advice you can, but he has to be allowed to make his own decisions — and his own mistakes.”

Read the complete interview with Justin Bieber in The Hollywood Reporter.