Kendall Jenner rushes to Instagram to show off her nipples in a new photo shoot. It looks like the 18-year-old really is ready for Victoria’s Secret. 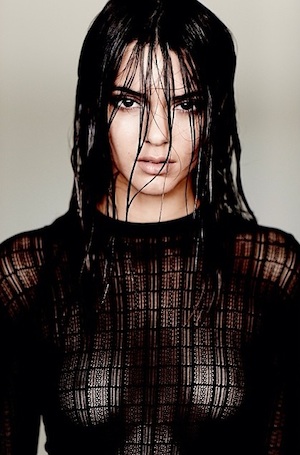 Kendall Jenner bares her nipples for a sexy photo shoot and quickly posts the provocative photo on her Instagram account.

Jenner captioned the photo, “sneak peak [sic] of today’s shoot with the amazing @nomadrg…can’t wait for you guys to see the rest of the photos!”

The photo shoot was shot by highly respected photographer Russell James who is the go-to guy for Victoria’s Secret and Sports Illustrated when brands want to ensure the models look as sexy as possible.

Even without her nipples showing, Jenner bears a striking resembles to big sister Kim Kardashian in the highly sexualized photo.

“Thanks @kendalljenner and amazing crew for a great shoot. Look forward to sharing all the shots soon. @thesocietynyc.” (According to their Instagram profile, Society Management is the “NYC division of Elite World” and “represents individuals who collaborate with prestigious international brands in arts & culture.”)

No word yet on what Jenner was representing with her nipples in this photo shoot but it’s not surprising the 18-year-old is willing to rev up the sexiness for her modeling career. After all, she gushed about posing for Russell James in April 2013 — Jenner said her dream career involved lingerie and angel wings.

“It’s always been kind of a dream of mine,” said Jenner when asked if she saw herself modeling for Victoria’s Secret. “It’s a very great thing to do, and it’s something I’d love to do.”

Jenner also posted a behind-the-scenes photo of the shoot to her Twitter account, which shows her in a cropped black top and black underwear as she appears to look through photos with James by her side.

The photos of Jenner with her nipples showing obviously incited a lot of criticism but true to form, Khloé Kardashian says the ultra-sexy photo is just Jenner being all cultured and stuff.

OK, so we get Khloé standing by her sister. But what did Bruce Jenner, Kendall’s dad, have to say about the nipples? Not much, only that he’s proud of her personal and career choices. TMZ says Bruce responded — though it’s not clear where or when — that he’s proud of his daughter and that she’s a “wonderful kid and great daughter.”

TMZ also cites a source who is supposedly close the Kardashian family who says Bruce is OK with the racy photos of his 18-year-old daughter because he believes it’s necessary for her professional life. “She’s a fashion model and that is what fashion models do,” said the source about Bruce’s reaction to Jenner’s photo.