Leighton Meester said “I will” when Adam Brody proposed to her after about 10 months of dating. 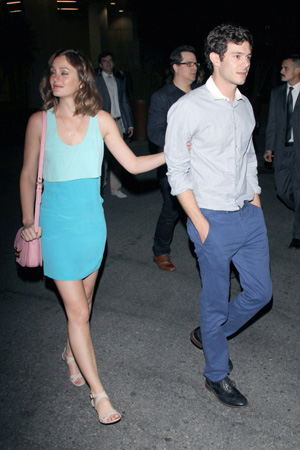 Leighton Meester and Adam Brody got engaged to be married, according to a new report. The Gossip Girl alum accepted The O.C. star’s surprise proposal after about 10 months of dating him.

According to an insider, Meester, 27, was not expecting to get engaged so soon, although she had talked to Brody, 33, about marriage sometime in the future, Star magazine reported. “Leighton and Adam are crazy about each other and have talked about getting married eventually,” the source said.

“It was the surprise of a lifetime, ” the source continued. “And she’s ecstatic!”

Meester and Brody first became friends while shooting The Oranges in 2011, and eventually began dating. For the moment, the couple “plan to get married next summer,” the insider added, saying they are still debating whether to get hitched in Southern California or travel overseas for a “destination wedding.”

Before dating Meester, Brody had a three-year relationship with Hart of Dixie‘s Rachel Bilson, who also starred with him in The O.C. Meanwhile, Meester broke up with her boyfriend Aaron Himelstein last year, whom she met while filming the teen drama Remember the Daze back in 2007. She also had a relationship with her Gossip Girl co-star Sebastian Stan for about a year.

Meester and Brody did a good job at hiding their relationship, but their own fans were quick to realize the two were more than the friends they claimed to be. After being spotted at the Los Angeles County Museum of Art together, the pair had no choice but to admit they were an item.

The private couple also traveled to Bangkok together earlier this year and were seen by many at the Thai city’s Siam Kempinski Hotel while there.

Meester recently said in an interview that while she’s not been in a lot of relationships, she has been in love.

“There’s an inexplicable chemistry,” she gushed. “I’ve never fallen in love right off the bat, I get scared to say I love you too soon because it means so much.”