The team tracks down pieces of an Asgardian artifact that gives Ward immense strength, terrible anger and unlocks memories he never wanted to see again in “The Wall.” 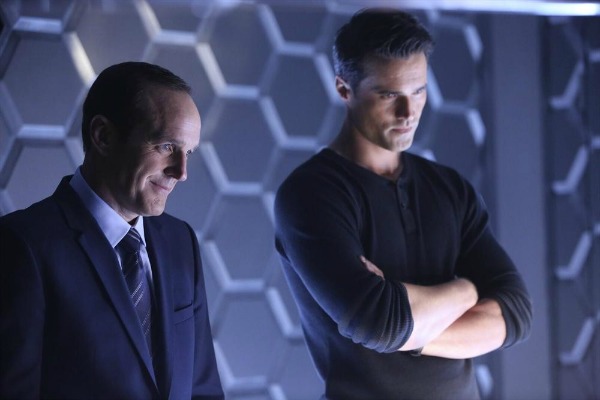 Slowly but surely, Agents of S.H.I.E.L.D. has been introducing us to each of its characters and this episode gave us more insight into Ward. Having the team find an Asgardian staff that gives the wielder inhuman strength and anger almost sounded like a joke when it became clear that Ward was the one who was going to be affected by it. I mean Ward is already the strongest member of the team (along with May, though I still haven’t decided which of them would win in a battle) and he’s always been a fairly angry guy. So why have him grab the stick? Well, it turned out there was a lot more strength and anger under there to be explored, as well as a whole lot of hatred.

I was fascinated to find out that the staff didn’t just set off biochemical reactions to give the wielder an adrenaline rush to trigger the strength. It also forced the person holding it to relive moments of anger from their life and it turned out that Ward’s anger had to do with his older brother throwing another kid in a well and then forcing him to stand by and not help. That spoke a lot about the kind of man that Ward is today and why he always has to be the protector of his group.

Randolph told Ward that the strength would wear off, but not so much with the anger that felt like it was tearing him apart. I wonder if that means that Ward will fly off the handle even more easily than he did before and if we’re about to see him go down a road where he seeks other methods to relax. Now, I’m thinking more like drugs or maybe booze, but speaking of methods of relaxation, I was completely blown away when Ward walked in through May’s open hotel room door.

May’s reaction to holding the staff was very different from Ward’s and though the moment was brief, it also gave a lot of insight into her character as well. She admitted that it didn’t affect her in the same way because she saw those awful pictures in her mind every day. So could it be possible that Ward just went in her room to talk to someone who could handle hearing the terrible things he needed to get off his chest? He seemed to want to open up to Skye, but I have a feeling he was also afraid of scaring her half to death. If he did go in there for another type of R&R, then I don’t know how I feel about that. While I do like the flirtation that he and Skye have going, I don’t feel like they’re anywhere close enough for that sort of thing either. Also, May does appear to have more in common with Ward.

No, forget it. Ward and May sleeping together still makes my brain hurt, whether they have a lot in common or not. I guess we’ll have to wait and see next week just exactly what happened — or not. The show could just as likely leave it all a mystery for a good long while and reveal what happened in flashbacks many episodes from now. I would hate that, but it wouldn’t surprise me one single bit.

Skye and May agreeing on Thor being dreamy. Gotta say, I was right there with them.

Ward kindly talking Simmons up to the tree, by getting her to talk geek-speak. So cute that she also figured out what he was doing.

Fitz seeming to get jealous when Professor Elliot called Simmons “pretty as a peach.”

“East of a river.”
“And lots of bones. Let’s see what we can dig up… see what I did there?” — My favorite part was the way he delivered that last line.

Shirtless Ward. Thank you, show. That is all.

“The only help I need is to stop those guys before they hurt someone else.”

Ward admitting to Coulson what the staff did to him.

“What did it do to me?”
“It shines a light in your dark places.” — Am I the only one who giggled at that line?

Skye pointing out that she couldn’t figure out who was talking, the regular Ward or the new, angry one.

Ward choosing to grab the second piece of the staff and letting the anger take control. Whoa!

Coulson sticking his hand in Elliot.

May facing Petra with the full staff. So awesome.

“How did you hold all three?”
“Because I see it every day.”

Want to get updates about your favorite TV shows sent directly to your inbox? Sign up for our SheKnows newsletter! >>

What did you think of this episode of Agents of S.H.I.E.L.D.? What do you think happened when Ward went into May’s hotel room?