Caleb learns that he and Miranda are at the heart of the curse on Ravenswood, but that doesn’t mean answers are easy to come by as he and his new friends quickly discover. There is an evil among them and someone they distrust is working on their behalf. 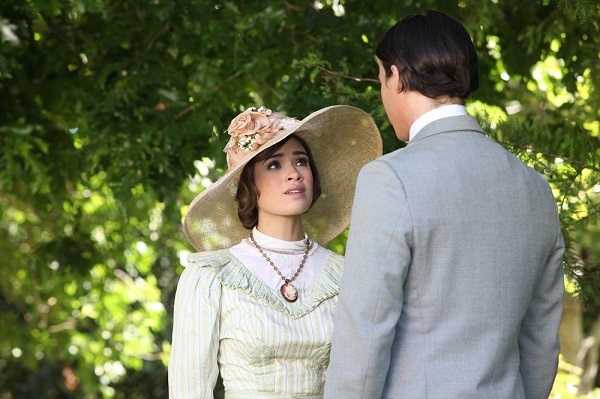 The mid-season finale of Ravenswood was pretty revealing. More so than I expected, using its sister show, Pretty Little Liars as an example. There are also plenty of unanswered questions that will make the wait until January rather excruciating.

At first I thought it was becoming confusing because you never know if what Caleb is seeing is a dream or if he’s tapping into something otherworldly. By the end of “Scared to Death,” it was pretty apparent that his dreams are also his reality. Welcome to the new normal, as Luke so aptly said.

The other side sure seems tapped into Caleb. They are actively haunting him, opening windows and standing behind him waiting to be seen. I wonder if they don’t want to be seen or if Miranda is the only ghost that the group can currently see.

Who can you trust?

Now that the group is as close-knit as they have become, I find myself leery of any outsiders, including Olivia’s boyfriend, Dillon. As soon as he offered to help her figure out what was in the box of Henry’s belongings, I immediately thought he couldn’t be trusted.

When Dillon saw the freaky little girl Miranda’s mommy and daddy were calling Max walking through the hallway, I knew my instincts were correct. Dillon wasn’t in the room with the others when they were with the spirit board, so he wasn’t opened to the other side. Somehow, he’s orchestrating things with Max on behalf of an unknown male.

It was pretty shocking to realize that Caleb’s lack of communication with Hanna meant she didn’t even know Miranda was dead. She loves him a lot, but they have already kept so many secrets from each other that she’s surely going to wonder why he’s keeping this one. She’s going to be even angrier if she ever finds out that instead of going home he was busy dying.

Was anybody else amazed that Remy knows somebody’s phone number? Who memorizes phone numbers anymore? Way to go Remy! The rest of the world would have been stuck without any way to contact help after sleepwalking their way into breaking and entering. She’s full of surprises.

The curse is… unclear.

It’s unclear what the curse was, exactly, but it seems to be tied to original Caleb and Miranda. They were deeply in love, so much so that when they married they didn’t just pledge their love until death, but for eternity. Unfortunately for them, they died on their wedding day in a boating accident, taking three of their friends with them.

It’s also a bit cloudy as to exactly who Thomas and Esther were. They were so certain of the curse that they sealed themselves inside a wall to die in the hopes that their living sacrifice would bring back the originals and break the curse. At this point of the game, even Luke is willing to believe they were brought back to life for a reason if it means the rest of them might outrun the curse.

But how could the curse be broken if one of them is already dead? Even though Caleb denied being “the chosen ones” and used the argument that he has a girlfriend, they do have feelings for one another, and even he’s admitted his confusion about her. Miranda even had to give him a nudge to rejoin the living.

It makes sense that they are the originals. Neither of them has any discernible memories of their childhoods. They were about as lost as two children could be. Reincarnation and that sense of family — the need to belong — is part of what sent them both to Ravenswood, so why rule it out?

I’m definitely onto something with Mrs. Grunwald and Collins knowing more than they let on, and now we know there is a reason Collins keeps a lock of hair of one of the deceased. It seems that if he hadn’t replaced Miranda’s lock that was taken, Caleb would have died. Is he a direct descendant of original Miranda’s family in the same way that Caleb is of original Caleb’s? Maybe it’s his job to protect those who fall under the curse.

That’s a heavy burden to bear and would be enough to make you the strange dude in town. It kind of gives him an out with respect to being less sociable, don’t you think?

What are your theories on the curse, the originals and the man who’s controlling things via Dillon and Max? Drop a few ideas with your thoughts in the comments!