California transplant and London frequenter Lissie is on the edge of something brilliant. Get on board now. 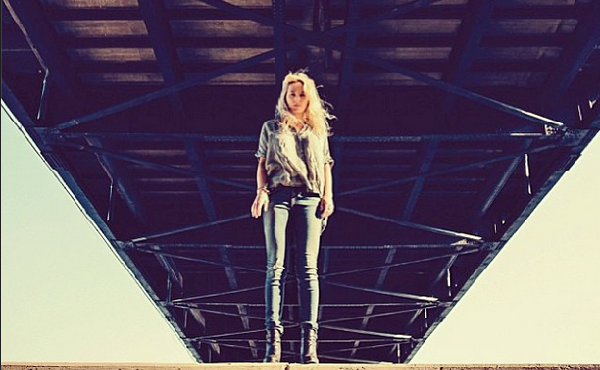 Elisabeth “Lissie” Maurus sauntered her way into our music collections several years ago with the release of Catching a Tiger and now she’s back, louder and more popular than ever with Back to Forever.

Technically, Lissie was born and raised in Illinois and didn’t move to California until she was 21 years old. However, from the smattering of freckles to her to-die-for blond hair, everything about this guitar-toting songstress screams “California girl.” Strangely enough, though, it was England that first accepted Lissie’s music. That’s one of the reasons she returned to London to write and debut her newest album. London seems to have quickly become just as much of a home for Lissie as California and Illinois.

Still. We’d love for America to fall in love and fight for her more permanent return. Will it happen?

Her debut, Catching a Tiger, was a brilliant mix of folk, pop-country and electrified rock. It had a “look at me now!” vibe, eager to please anyone and everyone. It was good and, in England and Norway especially, it worked. She earned gold records in both countries. That was three years ago, though. With the release of “Shameless” off her second album, a louder, more raucous Lissie returned to the music scene. (She even drops an F-bomb!) We couldn’t be more stoked.

Back to Forever is thoroughly grounded in Lissie’s rock ‘n’ roll wheelhouse and filled with heartache. Her rough voice stands out in the sea of girly sounds currently topping the charts and it mixes splendidly with the electric guitars that drive her entire album. There’s a rawness to her sound that’s most noticeable on “Further Away (Romance Police).” The song’s vintage beats and guitar will draw comparisons to ’80s rock goddess Stevie Nicks, but there’s so much more to this record than that.

Whatever comparisons we dare to make, there is one thing that must be known: Lissie is definitely her own woman. She’s so assured of her one-of-a-kind sound and ability to make anything her own, she’s also made a bit of a name for herself by releasing stellar covers of some of her favorite songs.

She even took the top spot on Paste‘s list of 20 Best Covers of 2010 with a tie between her cover of Lady Gaga‘s “Bad Romance” and Kid Cudi’s “Pursuit of Happiness.” In 2012, she even covered Fleetwood Mac’s “Shameless” for the Safe Haven soundtrack.

With the release of Back to Forever, Lissie is making the rounds and gearing up for even bigger success. Her second album broke into the Billboard 200 and now she’s all over late night television. In October, she appeared on The Tonight Show and buddied up with Jay Leno. Tonight, our girl Lissie rocks everyone’s socks off on Conan.

Give her a listen. Buy Back to Forever and show Lissie some love. She’s currently touring the U.S. before headed back to the U.K.