Camille Grammer has had a rough month with cancer surgery and a domestic violence incident. Now her ex-boyfriend is on the run from her lawyer. 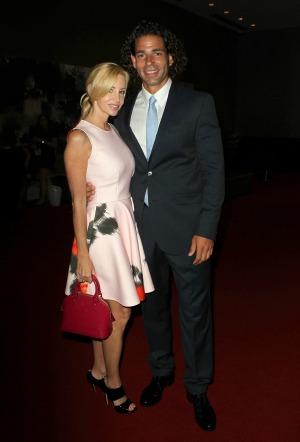 Camille Grammer wants justice served, but her ex-boyfriend Dimitri Charalambopoulos is making sure that doesn’t happen. The former reality star’s lawyer Larry Stein and his private investigator have been trying to serve him with legal documents.

After the couple’s alleged domestic violence dispute, Charalambopoulos was ordered by the court to stay 100 yards away from the TV personality and her children. However, he’s making sure that Grammer’s legal team can’t catch him to be served.

Poor Ashley Greene! A burnt home and now a lawsuit >>

To make matters worse, TMZ is reporting that the bankruptcy attorney is making time for press interviews to state his case. He wants the media to cover his side of the story.

Grammer is not going to take this situation lying down. On Tuesday, her lawyer filed a claim in the court system which notes Charalambopoulos’ slippery ways. Stein wants the judge to confirm that Grammer’s ex is aware of the restraining order against him.

The charges against him are serious. The former Real Housewives of Beverly Hills star alleged that he abused her just days after undergoing a hysterectomy for endometrial cancer. Grammer claimed that she endured a beating for almost an hour.

In addition to recovering from surgery and dealing with her ex-boyfriend, the 45-year-old mother-of-two must also contend with the fact that her ex-husband Kelsey Grammer has not seen their two children during this stressful time.

A rep for the Frasier star told RadarOnline, “Your sources are full of it and clueless as well.” Yet there is no indication that he is pitching in while his ex-wife is focusing in on her health.

Let’s hope that justice is served soon, it sounds like Camille Grammer could use a break.