Jennie Garth has split from her boyfriend Michael Shimbo after just three months of dating. 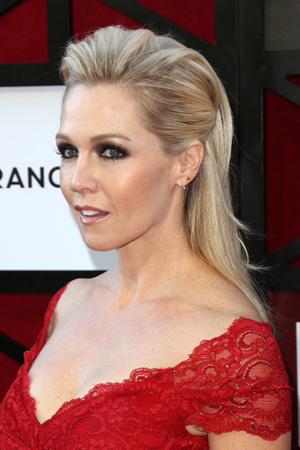 Jennie Garth is single again after news of her split from Michael Shimbo hit the Internet waves on Tuesday. The pair had only dated for a mere three months before deciding to go their separate ways.

Garth and Shimbo split while they were in Austin, Texas, for the Formula One U.S. Grand Prix this past weekend. According to Us Weekly magazine, the actress and the media executive from San Francisco realized they lived too far apart to stay together.

“Michael doesn’t live in L os Angeles,” a source told Us. “So it was difficult to maintain a long-distance relationship.”

The couple first announced they were an item back in September, when Garth posted a photo of herself and Shimbo on Instagram with the caption, “#luckylady.” They were initially introduced through a friend and were said to be “great together,” and “super sweet,” with one another.

Once they went public with their relationship, Garth and Shimbo posted various photos of themselves and of each other on several social media sites. They were also seen attending James Franco’s roast on Comedy Central Aug. 25.

Prior to dating Shimbo, Garth was linked to photographer Jeremy Salken in January of this year and briefly dated photographer Noah Abrams in August 2012.

Jennie Garth is doing just great, thank you very much >>

But, the former 90210 actress is mostly known for her marriage to Twilight hottie Peter Facinelli, whom she split with after 11 years of marriage. The couple finalized their divorce in March 2012 and have three daughters together; Luca, 16, Lola, 10 and Fiona, 7.

Meanwhile, Facinelli has been dating Thor actress Jaimie Alexander since November 2012, eight months after his split from Garth. While their relationship is now widely known, at the beginning they remained very discreet about the coupling.