Bob Dylan’s new video for “Like a Rolling Stone” will have you flipping through 16 fictional television stations just like a… well, you know. 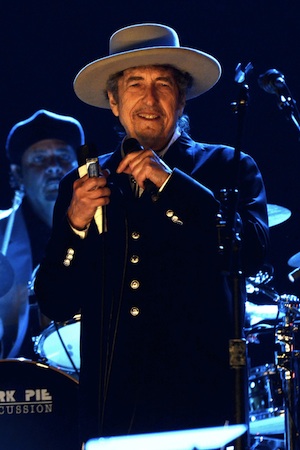 Lady Gaga, Katy Perry and Miley Cyrus could all take a hint from Bob Dylan.

While those ladies are releasing lyric videos, fan videos and official videos all before the song has even been released, Bob Dylan waited almost 50 years to release a video for his song “Like a Rolling Stone.”

But the wait was worth it.

The interactive video consists of 16 different television stations which are available for you to “flip” to at any point during the song.

We talk to The Flaming Lips’ Wayne Coyne >>

But Dylan’s is not the only famous face you’ll see while flipping through the channels. See if you can spot HGTV’s Property Brothers, Drew Carey and the guys from Pawn Stars. We think we saw a Duck Dynasty cast member in there too.

Interlude CEO Yoni Bloch explains, “You’ll always miss something because you can’t watch everything at the same time.”

Check out the video for “Like a Rolling Stone” via Bob Dylan’s site and let us know what you think in the comments below.