The CW’s Arrow is finally adding a mask to Oliver Queen’s disguise. It’s about time the poor guy had more than a hood and some eye makeup to conceal his identity. 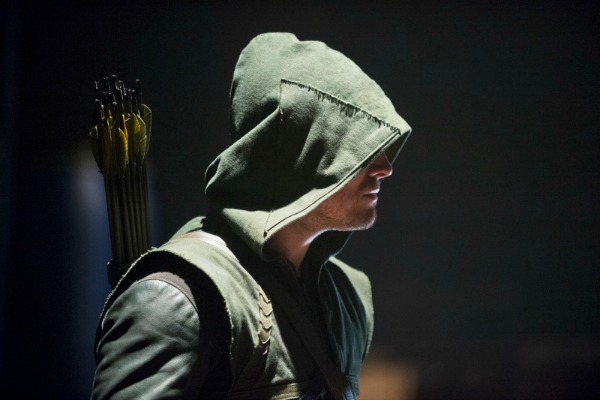 Oliver Queen has always had his trusty hood, a voice distorter, shadows and some fairly questionable eye makeup to conceal his identity when he’s fighting crime on Arrow. But now the man in green will have one more layer of protection to keep people from finding out who he really is: Oliver is getting a mask.

Entertainment Weekly has posted a picture of the new mask, which is simple and seems to fit Oliver’s personality perfectly. Why did they decide on a mask now, in the second season? Executive producer Andrew Kreisberg said it was all about the evolution of Oliver as the Arrow.

“Conceptually, it was something we wanted to do because Oliver himself is evolving as the Arrow — from vigilante to hero, sort of from Arrow to Green Arrow — and we wanted to see that progression in his costume as well,” Kreisberg said. “As Oliver is embracing being a hero, being a hero means stepping out of the dark and being more of a symbol, so he has to take steps to conceal his identity more.”

Adding a mask does seem like a good idea, considering how many people the Arrow has to deal with who also happen to know Oliver. “It’s going to allow the Arrow to interact with people who don’t know his identity in a much more organic way than having him constantly keep his head down,” Kreisberg revealed.

If you think that picking the mask was a simple process, think again. Apparently costume designer Maya Mani showed about 50 options to the producers before they decided on the final one. “A lot of our early attempts were very, shall I say, Joel Schumacher-esque. And it was really Greg who said not to overcomplicate it,” Kreisberg said. “And I think what’s so wonderful about the design that Maya came up with is that it really is very simple, and it feels as if it’s been part of his costume since the beginning. Once we finally had this mask and put it on Stephen [Amell], even Stephen was like, ‘This is the right one.'”

The decision to put a mask on the Arrow at all wasn’t a light one, either. “For all of the work that went into creating his mask, those are all the reasons we didn’t do it when we did the pilot,” Kreisberg said. “And also, sometimes, people have this knee-jerk reaction to seeing somebody in a mask. ‘Oh, that’s silly.’ But I think that now that people see how serious the show is and how grounded it is, the mask is going to feel like a natural evolution.”

Look for the mask to make its first appearance in Arrow‘s Dec. 11 episode. The reasons why Oliver will suddenly decide to add a mask to his disguise will be addressed on-screen. “He doesn’t just put on a mask,” Kreisberg said. “It’s actually a big plot point in an episode, and there really is a story behind not only the need for the mask but also who provides him with it. It’s going to be a little bit of a surprise, and once they see how the mask comes into creation, I think people will be really excited about it.”

What do you think? Are you happy that Oliver will now be wearing a mask when he gears up as the Arrow?