Jay Leno is at the center of a lawsuit so ridiculous it’s actually true: A woman says Leno’s remarks that she engaged in sexual acts with a rat destroyed her sex life. 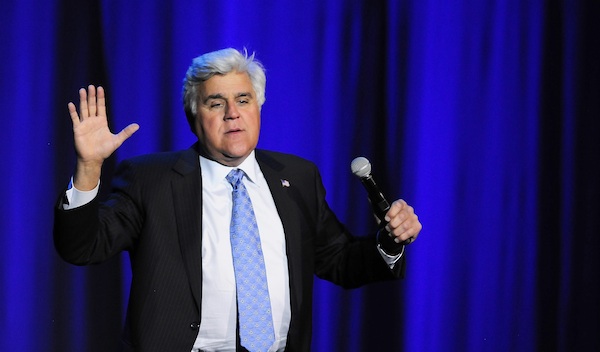 In the world of parody, there are winners and losers. And if your co-workers think you smuggle pet rats onto planes, you’re probably on the losing side and should just ride the wave of bad press before your life gets worse.

That might be a lesson American Airlines flight attendant Louann Giambattista is about to learn — and quick. Giambattista just named Jay Leno and NBC Universal in a new lawsuit filed Monday. She’s suing Leno and NBC for emotional and financial distress that she claims are the direct result of “crude and defamatory” remarks made by Leno and his guests during his nightly talk show, The Tonight Show with Jay Leno.

The remarks stem from a July 2013 show on which Leno and three other guests accused Giambattista of engaging in sexual actions with a rat while on a plane.

You can watch the specific segment from The Tonight Show below (fast forward to 2:35), but basically, Giambattista’s attorney says the comedic suggestion that she hid rats in her underwear as a way to get sexually intimate with the animals was “malicious” and portrayed Giambattista as “depraved.”

“In a wholly uncalled for and unsubstantial attack on plaintiff’s character, the second panelist [Kira Soltanovich] accused Ms. Giambattista of using rats for her own sexual gratification and portrayed Ms. Giambattista as a woman engaged in sexual misconduct of the most depraved sort, bestiality,” says the lawsuit.

The suit also states that “Leno indulged [his] panelists’ outlandish comments and laughed as his guests attacked Ms. Giambattista’s character.”

Now, because The Tonight Show with Jay Leno is watched by well over 3 million people (per Nov. 1, 2013, figures), Giambattista says she has become a “pariah” in her community and that her husband “now suffers from severe sexual dysfunction.”

Giambattista also sued her former employer of over 30 years, American Airlines, for damages related to “debilitating anxiety” and post-traumatic stress disorder (PTSD) as a result of her co-workers’ allegations that she smuggled rats onto an international flight.

Note: Giambattista’s co-workers alerted immigration officials once the plane landed, but despite an in-depth search of her luggage and self, no rats were discovered.

NBC Universal had no comment on the lawsuit. Surprisingly, the Tonight Show panelists who are actually responsible for the worst comments about Giambattista and her rumored rat fetish are not named as defendants in the lawsuit.

Perhaps there is more financial gain to be had from pursuing Jay Leno and NBC?