Melissa Rycroft is one happy mother-to-be! She and husband Tye Strickland are welcoming a baby boy the second time around. 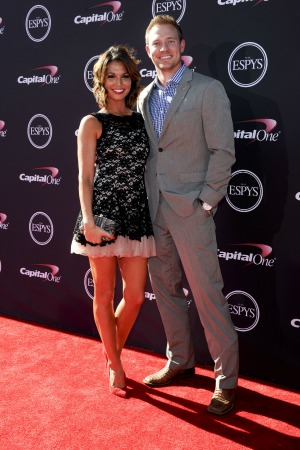 She’s already announced that she’s pregnant, but Melissa Rycroft and her husband Tye Strickland have even more reason to be excited: they’re having a boy!

The couple is expecting their second child in April. They announced the gender of the baby in a very fun way. The duo had a bakery fill the cupcakes with blue frosting in the middle to reveal the gender to their family and friends.

Big sister Ava Grace, 2 1/2, is getting used to the idea of having a sibling to play with.

“She knows there’s a baby in my tummy and she has a doll to take care of,” said the former Bachelor star. “But I don’t think there’s any way you can prepare. She’s not going to get our attention all the time and she’ll have to share her toys, as un-fun as that sounds. Her whole life is going to change. It’s not just going to be her anymore — but on the other hand, there’s going to be just that much more love in our family to go around!”

After an easy first pregnancy, it’s been a bit more challenging this time around for the mama-to-be.

She said, “With Ava, my pregnancy was smooth sailing. With this one, from day one I was really sick. We thought it would be a boy because it was so different! Everyone thought I was hungover for 10 weeks. But finally the sickness subsided and I got my energy back.”

The next step for the growing family is to think up a name for their baby boy. Just don’t expect a typical Hollywood name — Rycroft wants a simple moniker.

“We’ll probably stick to a classic style,” the Dancing With the Stars Season 15 winner said. “We definitely want something short and sweet that goes with Ava. Tye just wants to make sure it sounds good over a loudspeaker for when he’s on the football field!”