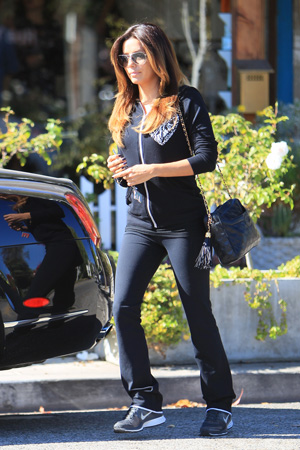 Eva Longoria has at long last stepped out in public with her new mystery boyfriend. The actress’ latest love turned out to be Jose “Pepe” Antonio Baston, president of the largest media company in Latin America, Televisa.

The former Desperate Housewives star and her new man were seen together at the Museo Jumex opening dinner at Casa De la Bola in Mexico City, Mexico. Prior to this outing, Longoria had been spotted with her mystery man several times, including at the Serafina restaurant in New York City last month, where she appeared “very happy” with her new relationship.

“He’s been sweeping her off her feet and courting her like a proper gentleman,” a source told People magazine. Another insider said that Baston is just “crazy about her.”

Before this new romance surfaced, Longoria had dated Penélope Cruz’s brother, Eduardo Cruz, whom she was rumored to be with until recently, although the pair had broken up some time ago. Another recent relationship Longoria had was with Ready for Love bachelor Ernesto Arguello, but it was short-lived and they broke up this August.

Before Longoria’s exciting new dating life began, the 38-year-old divorcee was married to Tony Parker. The basketball player famously cheated on her by sending sexy texts to his former teammate’s wife, Erin Barry. Longoria filed for divorce on November 2010.

Eva Longoria is happy with or without children >>

Meanwhile, Parker went on with his life as well, getting engaged to French journalist Axelle Francine in June 2013, after they began dating in 2011. The couple recently announced they’re expecting a baby boy together.

The NBA all-star shared the happy news on Twitter, writing, “Hey just wanted to say that I’m very happy today… me and my future Wife going to have a Baby Boy!!!!”