The most recent episode of The Walking Dead introduced a new, quieter Governor. Has he been redeemed, and if so, do we really want a good Governor? 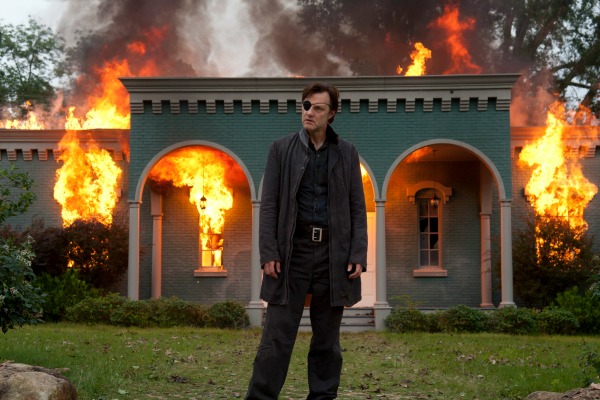 On this week’s episode of The Walking Dead, all focus shifted from the happenings at the prison to the Governor. In the timeline of the show, it’s been a couple of months since anyone has seen him. Last time we saw him was on the Season 3 finale, when he shot down a bunch of his followers and drove away with the last two men left standing.

It seems the reason that the Governor has been blissfully absent from the prison is that he was having some troubles of his own. His last two men abandoned him at a campsite (can anyone blame them?), and after a quick trip back to Woodbury to burn the place down, the Governor hit the road. First he drove, and then he went on foot — his hair and beard growing longer as his feet grew heavier with each and every step.

A sad and pathetic version of the man who once ruled Woodbury with an iron fist, the Governor came across a small group of survivors — and suddenly, his life changed. At first, he was nearly mute, barely answering their inquiries as to who he was and where he’d been. But soon, with the help of a little girl who reminded him of his own daughter, the Governor opened up.

When he began talking, the Governor told a different story about what had happened. He spoke about “the man in charge” and said that he’d “lost it.” He also talked about the incident that lost him his eye, saying that it happened when he was trying to help someone he “loved very much.” These new people listened to his sad tale and never once suspected that they were in the presence of a man who once kept zombie heads in fish tanks.

After he’d been there for a while, the Governor seemed to change once again. Once an evil tyrant and then a helpless mute, he shifted again to a strong family man. He took in the two women and the little girl as his own and became their fierce protector. By the end of the episode, he had risked his life to save them and found himself in a ditch with none other than one of the men who’d abandoned him looking down on him.

With all that the Governor has been through, could it be that he really has been redeemed? Now that he has a pseudofamily, will his only desire be to keep them safe and keep his head down? Or will old habits rear their ugly heads as soon as he is given even the smallest amount of power?

And if the Governor has become a good guy, we have to ask the question: Do we want him that way? Seeing the Governor as a weak and broken man made fans feel sympathetic toward him, but is that what they really want? Isn’t the Governor a lot more fun when he’s a psychotic maniac?

What do you think of the new Governor seen in the most recent episode of The Walking Dead? Vote in our poll and weigh in with your opinion!