The latest sneak peek video for Agents of S.H.I.E.L.D. shows the team cleaning up a mess left by Thor: The Dark World. 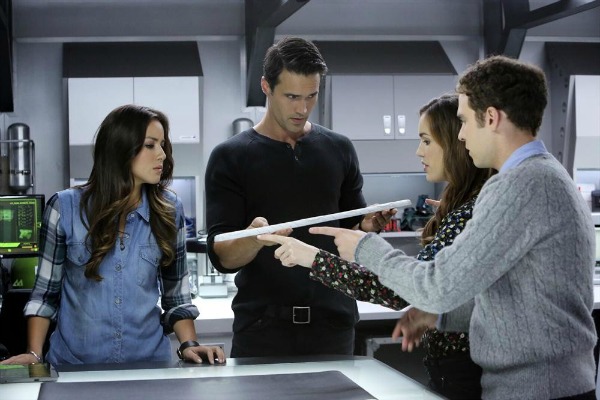 Now that Marvel has Agents of S.H.I.E.L.D. airing on ABC, fans get the joy of watching when the stories in the movies collide with those on the TV show. Last week, Marvel released Thor: The Dark World into theaters. The movie continued the adventures of Thor and saw him reluctantly teaming up with Loki to help save the world.

Though characters like Thor and Loki will not be seen on Agents of S.H.I.E.L.D., Marvel has still found a way for the characters from the TV show and the movie to interact… sort of.

In this week’s episode of Agents of S.H.I.E.L.D., Agent Coulson and his team are going to be cleaning up the aftermath of the events that happened in Thor: The Dark World. ABC has released a sneak peek video that shows the first few minutes of the episode.

The beginning of the sneak peek is a voice-over from Simmons, talking about how people in ancient times believed that the heavens were filled with gods and monsters. She goes on to say that now people (at least in the Marvel universe) are aware that the stories are true and these worlds, and their gods and monsters, really do exist. She also says that the revelation has left people with more questions… and an enormous mess to clean up.

The preview then goes into one of those moments that I enjoy the most in both the movies and the TV show — a moment where seriousness is replaced by humor in the flash of an eye. Just as Simmons’ voiceover fades, the real Simmons is seen surrounded by the team as they quite literally are cleaning up after Thor and his mess. It’s one of those times where Whedon’s influence is clearly seen, as he always has been a master at tugging at the heartstrings just before cracking you up.

After that, the clip goes into the new challenge that the team will be facing this week, all thanks to Thor and his friends. But don’t worry, you don’t need to have seen the film to understand the story.

Check out the sneak peek video below: