Justin Bieber’s party guests were forced to sign a confidentiality agreement that said they’d pay $3 million if they blabbed about what went on during the crazy bash. 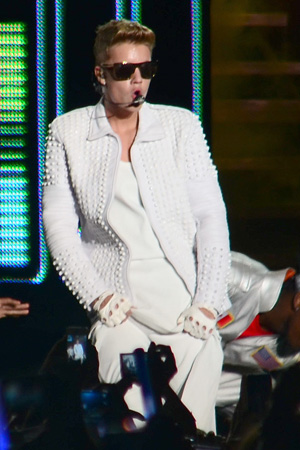 Justin Bieber, who’s largely known around his neighborhood for often disturbing the peace, threw a huge, noisy “Gatsby-esque” bash at his home recently. The party was apparently so insane that the teen pop idol had guests sign an agreement to pay up $3 million if they blabbed about it.

The loud shindig, which Bieber bragged was something out of The Great Gatsby, got the neighbors very riled up and cops were called three times to intervene by one “freaked out” resident, TMZ reported. But the Biebs fully expected the party to get crazy, so a top-dollar agreement was seemingly justified.

The document, which TMZ obtained, stated that anyone who violates the signed agreement’s requests would have to pay up a fee of $3 million to the singing sensation. There is no trial involved or any other legal intervention, only that they pay the fat fee.

The agreement prohibited guests from tweeting, recording or writing about the bash, sending phone texts, photos, Facebooking or any other means of communicating anything about what went on at the party. Even the workers at the event had to sign the silencing document.

Bieber evidently understands the hardships of the suffering economy. According to TMZ, he had a similar document for people to sign during a previous bash, although the penalty for that one was a whopping $5 million. So he’s considerably reduced the fee this time around.

While no details were allowed to be spilled by the partygoers, a neighbor who allegedly spoke with a cop got a glimpse of what was going on inside Bieber’s home during the wild celebration. The policeman supposedly told him that when the door was opened, a very strong pot odor wafted out.

Other than telling someone at the party to keep the noise down, police didn’t do anything else, nor did they arrest anyone in attendance. The neighbor who called the cops about the noise got fed up and finally filed a report against Bieber for disturbing the peace.