Alec Baldwin has once again found himself in hot water for his recent behavior and anti-gay slurs, but he does still have one person in his court, his daughter Ireland. 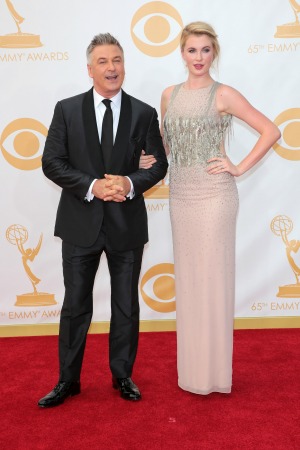 Alec Baldwin is the man who the media love to hate recently and to be fair, he has himself to blame for much of it.

Constant clashing with the paparazzi, an emotional case against his stalker Genevieve Sabourin and most recently an anti-gay rant that has earned him no friends.

The actor exited the court victorious last week after winning his case against the woman who has caused him immense distress in his life, only to then call a paparazzo, a “c***-sucking f****t.”

Baldwin denies he used the homophobic slur and insists he called the pap a “fathead.”

Yet the result has not been positive for the 30 Rock star. He was immediately suspended as the host of the MSNBC show Up Late with Alec Baldwin, as well as earning himself new critics and infuriating GLAAD and Anderson Cooper.

However, the Rock of Ages actor does have one person in his corner and that’s his lovely 17-year-old daughter Ireland Baldwin. The aspiring model has gone on Twitter to defend her disgraced dad.

Ireland tweeted, “My dad is far from a homophobe or a racist.”

The teen, whose mother Kim Basinger persuaded her to become a model, seems to share her father’s sentiments when it comes to the paparazzi and Ireland believes boundaries need to be set.

Ireland believes her dad is only trying to protect his family, her tweets continued, “Having paparazzi following my mom and I has not been thrilling.”

“Boundaries have to be made. Paparazzi have jobs to do, but some of them jeopardize people’s lives and cross a line.”

“My dad has an infant child to protect…”

“All the parents out there should understand. You would do anything to protect your baby.”

We understand why Ireland is defending her dad, but do you think she has a point?