On Saturday Night Live, Lady Gaga rips off several other performers with her Elaine-from-Seinfeld dance moves, then pretends to have sex with R. Kelly on stage. Here, we give you a by-the-second guide of moments you don’t want to miss. Actually, you do want to miss them, but here they are anyway. 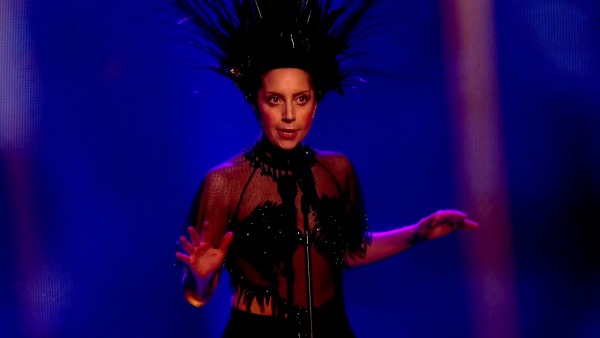 Lady Gaga rips off Michael Jackson with a move that really just looks like a full body dry heave.

Gaga isn’t done with her tribute to other performers. She also rips off Sally O’Malley from Saturday Night Live with an embarrassing kick, which she finished off by falling to the ground. Remember when you were a kid and you thought you were super cool by trying a move that failed miserably so you just fell over to make it look like you did it on purpose? Yeah, that’s exactly what’s happening here. (Here’s a little basis for comparison for those of you who are not as familiar with Sally O’Malley as you should be.)

Mother Monster kicks it old school style with what appears to be a Britney Spears dance move for a few seconds, and when she realizes the blond Donna Summer wig isn’t enough to carry the move, she does what all performers do in a panic — she grabs her crotch.

R. Kelly appears and throws Gaga over his shoulder where Gaga looks uncomfortable, awkward (what was with that little hand gesture?) and the antithesis of sexy. Here again, she transitions to a performer’s second favorite go-to place when they realize they are in the middle of an epic fail — the twerk. Not good. Not good at all.

PHOTOS: Lady Gaga did a lot of drugs >>

By now we’re just feeling like we’re in the middle of a magic trick gone grievously wrong, but Gaga’s not done with her little kid dance moves. Here, she breaks out some bizarre jazz shoulder move, and once again… falls over.

I guess we’re supposed to think when Gaga places her hand on Kelly’s crotch and looks back at the audience that she’s simulating oral sex. Again, it just comes off as clumsy. At this point, we’re so embarrassed for Gaga that we’re watching this performance through our fingers. It can’t get worse, right?

Wrong. Blame it on Gaga’s latest hip troubles, but she falls over again, this time with Kelly on top of her. This is the moment you’ve been hearing so much about. These two forget they are in the middle of this season’s worst live performance and proceed to fake-fornicate. Just, yuck.

We want to leave you with a few surprises, so we not-so-proudly present Lady Gaga and R. Kelly’s entertaining-for-all-the-wrong-reasons SNL performance.