A lot of people think Sandra Bullock and George Clooney make so much sense as a couple. But the actors have explained all the reasons that will never, ever happen. 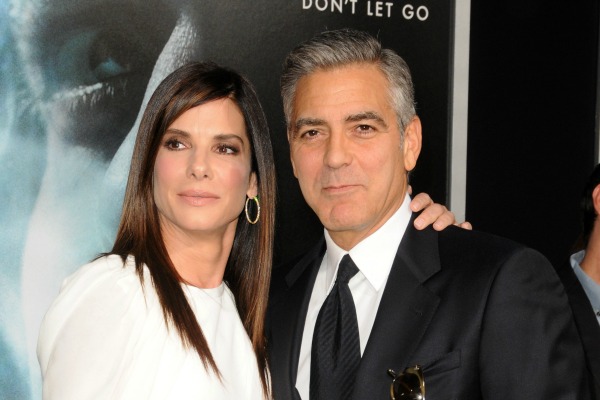 George Clooney and Sandra Bullock had so much chemistry in Gravity that fans are hoping their relationship will move to the next step. But the actors say that isn’t likely to happen.

George Clooney was at the BAFTA Britannia Awards in L.A. last week, and he talked about his blossoming friendship with Bullock.

“Let me tell you about Sandy. Yeah, she may say that she’s not all that attracted to me. But she calls every night at three in the morning drunk,” Clooney joked to Entertainment Tonight. “‘Hey George, what are you doin’?’ Nonstop. And then I just send her a bottle of tequila.”

Bullock has a different reason for not wanting to get involved with Clooney. She recently told U.K. morning show Daybreak that she has known the actor way too long to find him attractive anymore.

“Not that he’s not sexy because he is very, very handsome,” Bullock explained, according to the Huffington Post. “If you like that kind of dashing, charming, smart, talented, successful kind of thing. It’s not everyone’s cup of tea.”

But Bullock added that the “sexy is gone.”

However, Clooney said there is another reason for the friendship to remain completely platonic.

“We’re a little too similar, in all the disturbing ways,” Clooney explained.

The 52-year-old was talking about the fact that Bullock used to date one of his friends.

“There’s a certain bro code, you know what I mean?” the actor added.

Clooney has long been considered one of the world’s most eligible bachelors, and he has been linked to some of the world’s most beautiful women. But the actor recently said most of those rumors are made-up. It might seem like Sandra Bullock could finally be the one to remove his bachelor status, but it doesn’t look like that is likely to happen anytime soon.