Gaga goes for sexy and misses the mark on Saturday Night Live. Mother Monster knows how to bring the laughs, though. 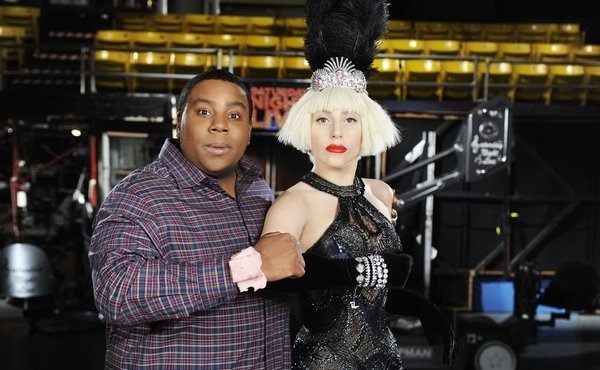 Lady Gaga did double-duty by hosting and performing on this week’s episode of Saturday Night Live. The night proved to be… interesting.

She started her hosting duties with near perfection. She joked about pandering for applause vs. actually earning it, segueing into a Broadway-esque version of her single “Applause.” Between the meat dresses, square-face hats and massive peacock costumes, it’s often hard to remember that behind the outrageous performance art, Lady Gaga is actually a very talented singer. The opening version of “Applause” definitely highlighted her talent as a singer.

Lady Gaga confesses to using a lot of drugs >>

Lady Gaga’s appearance in numerous skits also proved to be a hit. We especially loved it when she dressed up as an Apple Store employee for Kimye’s fake morning show and judged everyone for using fashion to define them. We all knew she was aware of the joke, but the long pan on her face and her coy grin added to the moment. Mother knows how to make fun of herself, and that’s a really redeeming quality.

Her first official performance of the night was far from funny, though. If Lady Gaga is a dancer, her moves were not on display during “Do What U Want.” Between grabbing her crotch and paying tribute to the King of Pop with a few of his signature moves, she mostly appeared to make up the choreography as she went along. We’ll blame the lame dancing on her recent hip injury. But the true crime of the performance occurred when R. Kelly took the stage with her. We’re going to completely ignore the ridiculousness of the girl who’s only job was to hold R. Kelly’s shades. The two performers flailed, humped and awkwardly groped their way across the tiny SNL stage and even spent a little time grinding together on the floor. If they were trying to make their performance as shocking as Miley Cyrus and Robin Thicke’s, they came up short. It wasn’t fun or even the tiniest bit sexy. It looked like the cast of Breaking Amish attempting to make their first porn film while still clinging to a few of their values by not actually taking their clothes off. It was awkward at best. At worst, it was a hot mess.

Gaga’s second performance was much better. Not only did it flow more naturally, but it was also the kind of circus one would expect from the Lady. The show started with Gaga in a massive, floppy colorful collar and playing a neon-pink piano. It ended with Mother Monster attempting to play guitar while a man in purple, sparkly leggings played an enthusiastic tambourine and danced around manically. That guy should be a meme.

The show ended with Gaga as a future version of herself, old and forgotten. She made her way through some of her hits in an attempt to make her building superintendent (played by Kenan Thompson) remember her. He seemed most excited when he found out she once performed with “empress” Beyoncé.

Our final thoughts are that the show wasn’t particularly bad and that Gaga did an excellent job of hosting. The Fame Monster is funny as hell, and she made a valiant and successful effort to entertain us. But — please — stay away from R. Kelly.

Want more TV news? We suggest you sign up for our newsletter >>