Alec Baldwin’s foul mouth just got him suspended from his MSNBC talk show — possibly for good. 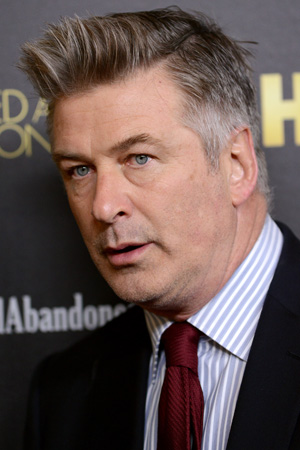 Usually, Alec Baldwin is only kicked off a plane — or off Twitter — when he has one of his infamous freak-outs. Not this time: The host of the MSNBC show Up Late with Alec Baldwin has been suspended from the network, effective immediately, for some words he used during a Thursday altercation with a photographer.

The actor — who just won a court case against his stalker, Genevieve Sabourin — used an antigay epithet against the photographer. Some thought he called the paparazzo a “fathead,” but Baldwin later admitted he used a slur.

“I apologize and will retire it from my vocabulary,” he tweeted Friday.

It wasn’t enough for MSNBC. The network opted to suspend Baldwin from the lineup for this week and next. Baldwin then issued an official statement on his comments and suspension.

I would like to address the comments I made this past week.

I did not intend to hurt or offend anyone with my choice of words, but clearly I have — and for that I am deeply sorry. Words are important. I understand that, and will choose mine with great care going forward. What I said and did this week, as I was trying to protect my family, was offensive and unacceptable. Behavior like this undermines hard-fought rights that I vigorously support. I understand Up Late will be taken off the schedule for tonight and next week.

I want to apologize to my loyal fans and to my colleagues at MSNBC — both for my actions and for distracting from their good work. Again, please accept my apology.

Should MSNBC fire Alec Baldwin for good? Sound off below!