Preproduction on Star Wars: Episode VII is underway, and we’ve got a photo to prove it. Say hello to our little friend. 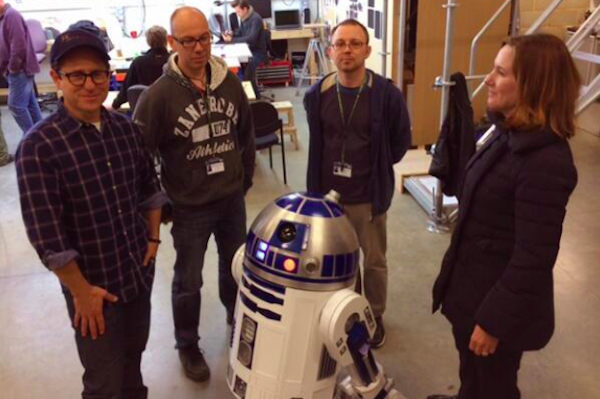 J.J. Abrams has gifted us with a Star Wars treat. The director’s production company, Bad Robot Productions, has given us a behind-the-scenes look at the upcoming Star Wars: Episode VII. They tweeted out a photo featuring Abrams, Lucasfilm president Kathleen Kennedy and a familiar face — or should we say, robot?

It’s R2-D2! He’s back and ready for more space adventures. The Star Wars canon is filled with timeless characters, and R2-D2 is definitely one of them. Unfortunately, we still don’t know what Episode VII is about. It remains hidden in J.J. Abrams’ infamous box of secrets.

What we know for sure is that production is slated to begin next spring in London. They’ll head to Pinewood Studios, where they’ll kick off a new chapter of the Star Wars mythology. In terms of casting, we’ve all heard that Harrison Ford, Carrie Fisher and Mark Hamill could reprise their roles as Han Solo, Princess Leia and Luke Skywalker. Yet none of the actors has revealed any concrete details.

John Williams on board to score Star Wars: Episode VII >>

On the newbie front, several young actors — including Fruitvale Station‘s Michael B. Jordan — are rumored to have auditioned for the film. There’s also been word that Benedict Cumberbatch and Jonathan Rhys Myers might be involved. We’d be fine with any one of them signing on. Besides, who wouldn’t want to be the next Jedi?

Star Wars: Episode VII was originally scheduled to be released in the summer of 2015 but has been pushed back to Dec. 18.