Jennifer Love Hewitt’s fiancé, Brian Hallisay, won’t be facing any criminal charges after he allegedly attacked a photographer in September. 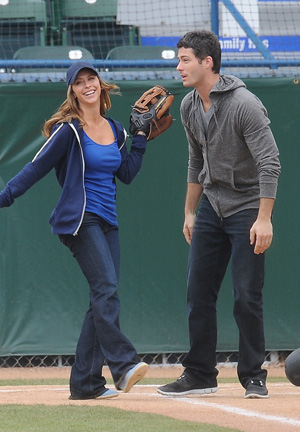 Brian Hallisay, Jennifer Love Hewitt‘s fiancé and father of her unborn child, is off the hook after an alleged attack against a paparazzo this past September.

Sources told TMZ that the “City attorney’s office tell us [that] battery charges won’t be filed against 34-year-old Brian Hallisay due to lack of sufficient evidence.”

The alleged incident took place outside the Toscana restaurant in Brentwood, California, when Hallisay and Hewitt were exiting the eatery. Apparently, a photographer approached the couple to take some pictures, but they asked him to lay off. However, the persistent cameraman began snapping away, ignoring their request to be left alone.

Hallisay, 34, got angry and went on to have a confrontation with the man resulting in a scuffle. The paparazzo claimed that he was shoved by the Client List actor and suffered an eye injury during the brawl.

Evidently, the pregnant Hewitt felt bad for the photographer and let him take some more photos of her and Hallisay before they went on their way.

Not happy with the incident, the paparazzo went down to the police station later that day and filed his report against Hallisay. But TMZ sources told the site that cops at the precinct saw no visible injuries to the man’s face.

So even though police launched an investigation into the matter, they came up empty-handed and Hallisay is free to go on his merry way.

The alleged attacker’s fiancée is staying busy a month before their baby is due. Hewitt, 34, recently launched a maternity clothing line for A Pea in the Pod named L by Jennifer Love Hewitt. Although the former Ghost Whisperer star’s collection won’t hit stores until March, she’s already been modeling a few of her creations.