Miley Cyrus has been raising eyebrows for the past few months, but she says she’s been doing it to show all women it’s OK to be yourself. 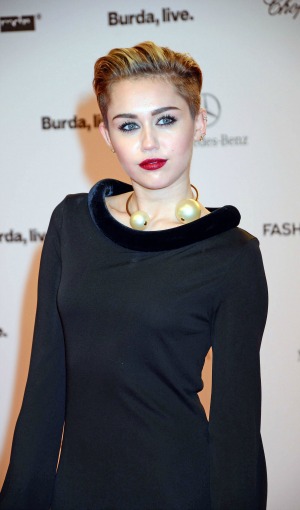 Miley Cyrus has been making plenty of waves lately, and has some very strong opinions about herself. In fact, the singer thinks she is the voice of a feminist generation.

“I feel like I’m one of the biggest feminists in the world because I tell women to not be scared of anything,” Cyrus told BBC Radio 1 in a recent interview. “For me, it’s not even that I’m a feminist. I’m for anybody. I’m for everybody, for everything. I don’t care what you wanna do in your life, or who you wanna be with, who you wanna love, who you wanna look like.”

Cyrus, who showed up surprisingly very clothed to an event on Wednesday, explained more ways she’s helping women in an interview with Cosmopolitan magazine for their December 2013 cover.

“I’m a feminist in the way that I’m really empowering to women,” Cyrus said. “I’m loud and funny and not typically beautiful.”

Some felt Cyrus’ performance at the MTV Video Music Awards was demeaning for women, and has even been mocked by the likes of Sinéad O’Connor and Lily Allen. But BBC also had a sociologist on their show to explain exactly how it’s possible that Cyrus can take her clothes off and dance around in her bear-like underwear and still consider herself a feminist, and the explanation actually seems to make some sense.

“There’s absolutely no contradiction at all between being a feminist and taking your clothes off and being comfortable about displaying your sexuality,” sociologist Catherine Hakim told BBC Radio 4, according to the Huffington Post. “She’s using it for her own purposes, she’s increasing her fan base, she’s making a lot of money, she’s doing what she wants to do.”

In the end, though, Cyrus really just feels that she’ll be successful if she continues to happy.

VIDEO: Lily Allen slams pop culture in “Hard Out There” >>

“You’ve got about 90 years — hopefully we all live to be 105 — you’ve got about 105 years on this earth and, like, you should be happy every single one of those [years],” she explained. “There’s no reason to not be. It’s like, as long as you’re breathing, you should just find the best in everything.”

Miley Cyrus is getting ready for her Bangerz tour, which will hit the road in February.