The Vampire Diaries is one whirlwind after another, and we love it! The Silas and Amara story came to a close tonight with Bonnie’s return to the living, but things are far from good. 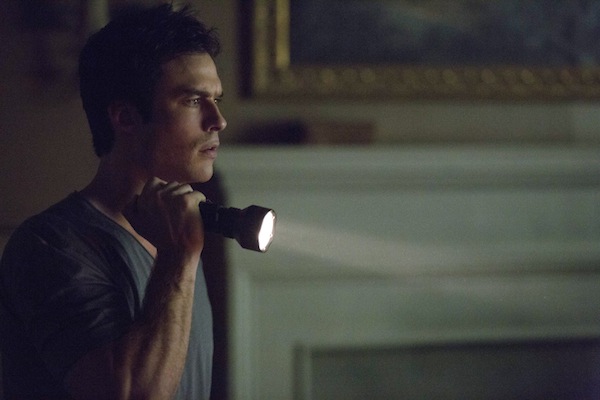 One problem bites the dust and 10 more emerge on The Vampire Diaries. The doppelganger madness has been put to rest, and now it’s on to the college drama. Season 5 may just turn out to be the best so far!

The classic Romeo and Juliet ending

First on tonight’s episode is the tragedy of Amara and Silas. Amara just wants to die and, after sucking out all of his blood, Silas is more than happy to oblige. Oh, and so is Qetsiyah. And Amara is just trying to commit suicide. It’s kind of weird when you think about it that they have this little competition over who can kill the girl first.

Anyways, Damon (Ian Somerhalder) realizes Amara’s time on this earth is limited and since Silas decides he’s not interested in helping Bonnie anymore, a new plan needs to happen fast. Damon and Elena (Nina Dobrev) propose making Bonnie the new anchor once Amara dies, and Qetsiyah signs on to help. It’s like a freaky episode of The Parent Trap as all the Elena doppelgangers get together to help Qetsiyah with the spell.

Of course, Silas shows up and ruins it. He doesn’t want the other side to continue to exist since he’s still a witch. He takes Amara and tries, but doesn’t succeed, to kill Qetsiyah.

It’s a fight to the bitter not-so-dead death 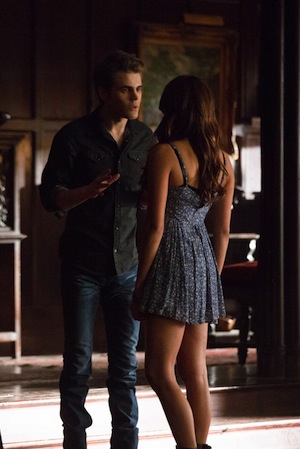 Silas takes Amara to the middle of the woods. Aside from not wanting anyone else to find them, the middle of the woods is awfully romantic. They tell each other that despite everything, they still love each other. Aww. And that they still want to be together. Aww. And then Silas pulls a knife out to slit Amara’s throat. Not so aww, but we get it. The girl really wants to die, and Silas is helping her out of her misery.

Damon stops them just in time. He has to keep his word to Elena, after all. It’s actually kind of sad that he feels so beholden to his girlfriend. You’d think she’d be a little more understanding that sometimes, despite our best efforts, things don’t pan out as expected.

Stefan (Paul Wesley) shows up to help too and kills Silas. Amara gets all teary-eyed because the supernatural limbo still exists so they can’t be together. But since she’s the anchor, she just stabs herself with the same knife and says their “eternity begins now.” Only it doesn’t, because Qetsiyah was able to finish the spell in the nick of time. Silas will be trapped in the supernatural limbo forever while Amara moves on.

Qetsiyah quickly kills herself to join Silas in limbo. Creeper.

Three doesn’t always have to be a crowd

Bonnie becomes the anchor, which means she comes back into existence in the living world. Cue the tears. The display of friendship between Elena, Caroline and Bonnie gets us every time. Now they all get to be roomies and have the best college experience ever!

Well, not so fast. There are always consequences, people. For Bonnie, at least. Again. Now that she’s the anchor, she discovers that every time a supernatural dies, she will feel it. And it doesn’t feel so good, as you can imagine. No wonder Amara went insane.

Bonnie isn’t the only one feeling some pain, though. Stefan isn’t back to being in his happy place either even though Silas is dead. Memories of drowning still haunt him. He even collapses to the ground, it’s so bad. And that’s where the episode leaves us, with Stefan sprawled and groaning, “No, it’s supposed to be over.”

We thought so too, Stefan.