Steamy! Rihanna and Drake decide to turn things up a notch with a $17,000 visit to a Houston, Texas, strip club. 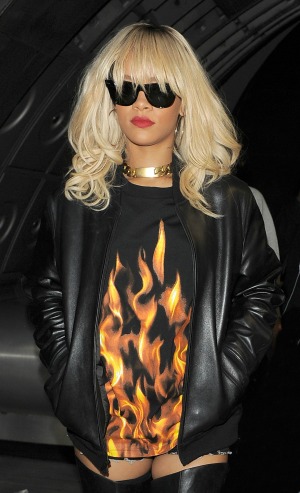 Rihanna and Drake have reportedly been getting cozy once again and have rekindled their romance at a strip club.

The “What’s My Name?” hitmakers decided to steam up their relationship by paying a visit to strip club in Houston, Texas, in the early hours on Thursday morning.

They most certainly did not leave empty-handed either because they managed to rack up a hefty bill, $17,000 to be exact.

Earlier in the week, the “All Me” rapper decided to show up and support RiRi at the Dallas leg of her Diamonds World Tour before taking her out for dinner.

The “Stay” hitmaker clearly decided it was time to return the favor and went to watch Drake’s Houston show, before taking him for a special treat — an evening at the V Live Gentlemen’s Club.

The pair enjoyed entertainment by lead dancer Jhonni Blaze, who revealed to E! News that RiRi arrived at the club alone around 2 a.m., shortly after she was joined by Drake, who ushered her into his VIP section.

Blaze revealed that the two “looked like a couple” and sat very close together while she entertained them for more than three hours! She also said she and the Barbadian beauty bonded over their similar hairstyles.

Drake, however, did not have much to say, because according to Blaze, he “was too busy throwing money.”

Drake and Rihanna do have a history and not just because of their believed brief romance in the past. They also share a habit for spending big money at strip clubs and this time was no exception. It is reported that Drake spent $10,000 and Rihanna spent just more than $5,000 before the pair left in the same car.

We wonder if things between these two will work out this time?