Spoiler alert! This review contains major details that took place during the episode titled “A Chill in the Air” on Reign. 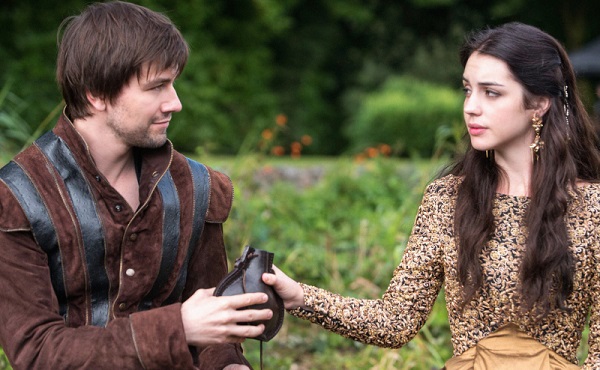 This week, Reign dove into its supernatural side and we finally saw some action between Mary (Adelaide Kane) and Bash. It was a strange, crazy ride, but definitely an enjoyable one. Spoilers ahead, peeps!

We started the episode with two unfamiliar faces in a carriage in the woods and quickly watched as one of them died. The girl who made it out alive and back to the castle was none other than Olivia (Yael Grobglas), Francis’ former girlfriend. Distraught from the happenings in the wood, Olivia sought comfort from Francis.

Mary’s a smart girl and knew (with the help of a sassy confrontation with Olivia) that the ex-lover needed to get out of the castle and away from Francis as fast as possible.

Olivia’s appearance obviously put Mary’s betrothal in jeopardy. Mary arranged for Olivia to be sent to another court, one that didn’t know of Olivia’s trysts with the Prince. That seemed way too easy, right? That’s because it was.

Sadly for Mary and luckily for Bash, Olivia’s pouting and the Queen’s interfering made it so Olivia could stay, after all. We’d be concerned if not for the fact that Grobglas is tagged as a “guest star” and not an actual recurring cast mate.

Great news! Reign (and a few more shows) has been picked up for a full season >>

In a brazen move, she told Francis she loved him enough to stay, even if he married Mary. She said she’d be content to be his mistress. I’d doubt the “realness” of such a proposition if it weren’t for the fact that our girl, Kenna, recently offered the same thing to the King. Apparently, even an unnamed attachment to a royal is better than being wed to a decently titled man. The things these girls are willing to do for pretty dresses and fancy baubles are really disheartening. Are they the world’s first gold diggers or do you truly think they love their men?

Bonus question: If the man you loved was to wed someone else, would you ever sign up for mistress duties?

What’s bad for Mary is good for Bash

Mary’s betrothal may be in jeopardy, but Olivia’s arrival definitely put Bash in a great position. The minute Francis crushed Mary’s feelings, Bash was there to comfort her with some wine and a kiss. Of course, the Twitter exploded with approving Reign fans. Mary and Bash are now affectionately called “Mash.”

Give a little, take a little? EP talks lack of historical accuracy on Reign >>

While Mary will most likely find her way back to Francis eventually, we’re definitely rooting for Mash. Francis can have whomever he wants, whenever he wants it. As a bastard, Bash should be so lucky. Plus, we’ve gotten used to Torrance Coombs’ striking similarity to Game of Thrones’ Littlefinger and have major crushes on the dude. Despite Mary’s political reasons for remaining chaste, we hope to see a lot more fooling around for Mash. It’s in everyone’s best interest, really.

There’s just one minor issue, though: Francis definitely saw Mash kissing. Eek! Will that make him angry or help him understand just how desirable his fiancée is to everyone else?

Bash’s hero instincts might not be for the best

Bash got the girl and managed to play hero. After heading to the woods to find Olivia’s travel companion, he happened upon the driver, barely alive. The two innocents had been hung and sacrificed to the pagan gods, but Bash attempted to rescue the struggling driver. From the looks of next week’s preview, his good deed won’t go unpunished. It’s a little confusing as to why he saved the man, though. Remember that time he spoke “pagan” to the “devils” in the woods? We assumed that meant he was one of them… at least in some capacity. So, why would he mess up their sacrifice? We can’t wait to find out!

Until next week, here’s a list of the awesome music from this week’s episode:

We highly recommend listening to Milo Greene and watching Reign.

What would it take for you to agree to being a mistress? And are you a “Mash” shipper or a “Frary” fan?