Sinéad O’Connor has nothing good to say about the music business — but does believe her beef with Miley Cyrus helped people understand the sexualization of young girls and mental illness better. 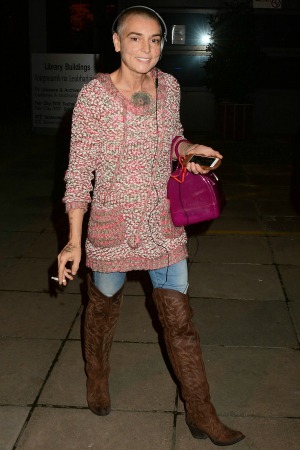 The feud between Sinéad O’Connor and Miley Cyrus may have settled down, but the feisty Irish singer says her opinionated rant actually did the world a lot of good.

In a Q&A session with Time magazine, O’Connor defended her stance against the music industry and its oversexualization of women, and said her argument with Cyrus actually opened up a really good dialogue about the portrayal of the mentally ill in pop culture.

“The music business is corrupt, a spiritually corrupt arena,” she told the mag. “It’s full of nothing but vampires and pimps, honestly. You couldn’t understand it unless you were in it. The only way to survive it is to love music.”

“I think what was more important really that came out of the Miley thing was this issue of being able to conversate about how mental health and human rights is now. I think she was actually very helpful. I think the two of us, without meaning to, did quite a good job in terms of creating conversation about something really, really important.”

She continued, “There’s a dreadful practice in this country going on at the moment, which is a complete breach of human and civil rights, of paparazzi lynching — that’s what I call it — young celebrities, young female celebrities, whether it’s Britney or Amanda Bynes or Lindsay Lohan or anyone who has either been diagnosed with an illness or is perceived by people to have a mental illness, and lynching them in the streets, trying to get photos of them looking like they’re having breakdowns, taking these pictures, selling them for tons of money to the newspapers with derogatory words written under them about mental illness and about these women, and making a buffoonery and a mockery of them.”

Female singers add their voices to the Miley/Sinéad feud >>

“That’s obviously extremely wounding and dangerous for those young women, because it doesn’t stay on the page or stay on the screen. It translates down to how people treat you in your life,” O’Connor, who has been open with fans about her own struggle with mental illness, explained. “Unfortunately there’s such a stigma about mental illness or perceived mental illness that people are bullied and treated like s*** and the illnesses are used as something with which to beat people, and in a manner than [sic] a physical illness wouldn’t be. You couldn’t go lynching with paparazzi girls who have broken legs and start writing about, ‘Aren’t these dreadful, awful people? Let’s have a great laugh at them because they have a broken leg.'”

Read the complete interview with Sinéad O’Connor in this week’s issue of Time.