Kim Kardashian is ready to have baby No. 2 with fiancé Kanye West. The famous couple plan on getting pregnant after their wedding next summer. 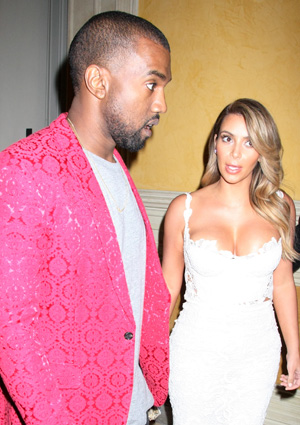 Will North West be having a sibling soon? Looks like South West may be on the way after reports claimed Kim Kardashian and Kanye West are ready for their second baby.

According to a source in the know, Kardashian “wants her kids to be close in age,” while West would really like a big family, the insider told Us Weekly. They have even set up the time line to start going for bambino No. 2. “[Kim will] try to get pregnant next summer, after the wedding,” the source added.

After a bombshell proposal on Kardashian’s 33rd birthday in October — where she was presented with a huge diamond at the AT&T Park in San Francisco — West is now insinuating a spectacular wedding as well. While on a radio show interview, the rapper actually said there would be “fighter jets” on the big day.

Apparently, Kardashian is letting West do anything he wants for their wedding because it is his first one, she told Jay Leno recently. This will be the reality maven’s third walk down the aisle, so she was ready to hand over the planning reins to her man.

Instead, Kardashian has stayed busy hanging out with her daughter, North West, or Nori as she’s affectionally called, taking lots of photos and posting them on Instagram. The little girl is now 5 months old and has been well kept out of the spotlight.

Meanwhile, Kardashian also had a run-in with the law when she was stopped for speeding on Tuesday. She was pulled over for going too fast on the Los Angeles freeway after trying to avoid several cars driven by crazed photographers.

The glamour-filled traffic stop caused major car jams as more members of the paparazzi tried to snap photos of the event. A report from TMZ even claimed there was a helicopter flying low over the highway aiming to get aerial photographs of the whole spectacle.