Justin Bieber is in agua caliente after seemingly desecrating the Argentinian flag on stage. 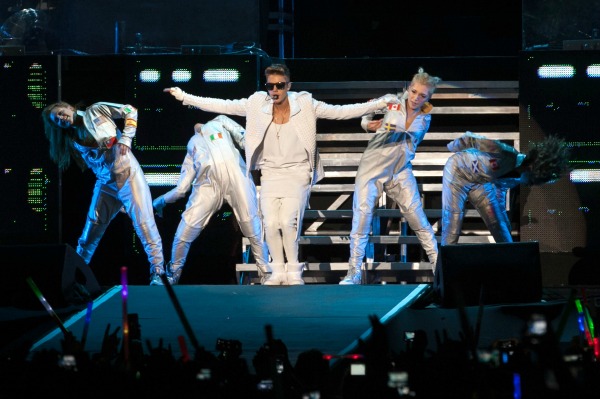 Justin Bieber is back on America soil, and not a moment too soon. After nearly causing several international incidents during the South American leg of his tour, his latest escapade is leaving some Argentinians calling for jail time.

At his Buenos Aires show Sunday, a fan tossed a couple of Argentinian flags onto the stage, where they landed at Bieber’s feet. The singer was then caught on video kicking at the flags and pushing them around with his mic stand, eventually dropping them off the stage.

The move left many fans and foes alike absolutely outraged.

But others defended the singer’s actions, saying that he probably didn’t know it was a flag and all unnecessary objects are removed from the stage for the safety of his dancers.

Bieber’s manager, Scooter Braun, commented on the hubbub on Twitter, too.

The incident has the potential to become quite a mess. According to the Associated Press, “Insulting Argentina’s flag is a crime punishable by up to four years in prison.”

But Bieber doesn’t seem too worried. In fact, he seems pretty oblivious.

Tell us: Should Justin Bieber go to jail for his flag hijinks?