Stop the presses! Eddie Cibrian and LeAnn Rimes are not divorcing. In fact, they are ready to expand their family. 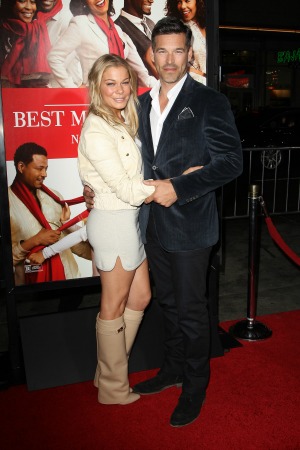 The press has been all over LeAnn Rimes and Eddie Cibrian lately suggesting that they are heading for divorce. However, they are looking to add to their family versus break their family apart.

In a new interview with Extra, the couple talked about wanting to have a baby.

Cibrian chimed in with, “She wants a little girl, badly.”

LeAnn Rimes is “too busy” for deposition >>

The former Playboy Club star is already dad to two sons with his former wife, Brandi Glanville. The boys, Mason, 10, and Jake, 6, are a big part of their lives and Rimes enjoys being a “bonus mom” to them.

The country singer seems to have the timing all planned out, too.

“I’m actually ending a record deal that I’ve been in since I was 11; 20 years at the same label. That ends next month, so, yeah, it’s exciting.”

With life off the road and a possible newborn in the future, the duo are currently shooting their six-episode VH1 reality series with the working title of LeAnn & Eddie. They thought it was a great opportunity to debunk a few gossip myths about their lives.

Cibrian shared that “a lot of people assume that they know who we are just because what they read in the tabloids and all that fodder. We wanted to give them a little glimpse to the opposite side of all of that, into our personality.”

Rimes continued, “You really get the sense of our lives and the normalcy… it’s nice to work together. I’ve heard some crazy rumor… we don’t fight on set.”

So, for anyone believing those divorce rumors, think again. They take all of the gossip in stride.

“It was just so ludicrous, saying something to the effect like I would text Brandi all the time whenever Leann and I are having a fight or something like that, and you know, that’s not true,” said the dad-of-two.

It looks like all is well on the Rimes-Cibrian homefront.