Kellie Pickler lets us know in a dreamy, romantic song just what kind of woman she is. Prepare for your hearts and souls to get warmed by her down-home, Southern charm. 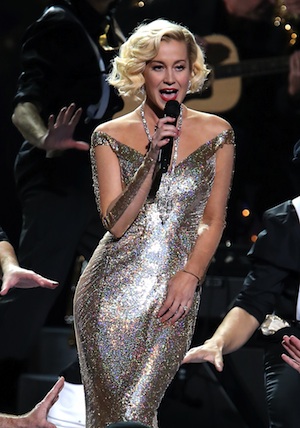 CMT described this new album as being “more personal than ever before.”

I say that it’s Kellie Pickler‘s most honest album than ever before.

It’s not just about execution when it comes to country music, it’s heart. And though Pickler has sung powerful songs and told trying tales, this album has some of her most soulful music to date.

Did you know Ms. Pickler was on a hit reality show? >>

Her album entitled The Woman I Am features a similarly-titled track and it will have you commending the woman she’s become.

The song starts with a country charm and the painful pangs of a classic guitar, but that couldn’t be why I fell in love from the first few seconds. It had to be because this track has that ever-desirable “it” factor.

Your stomach churns a little because you hope all that promise has substance, and Pickler delivers when her angelic, but somehow also sultry voice, appears. It’ll put you in a daze how this country gal could sound so much like Dolly Parton, and express wisdom and likability beyond her years.

Find out all the updates you want in the easiest way possible! Sign up for our newsletter here >>

If her 12-track album has any similarities to her headlining track, this is a must-have purchase for the holiday season. She even co-wrote three of the songs! Her raw sincerity, compounded with her immeasurable talent, fosters nothing but admiration for a gal so young. OK, so she’s not all that young, but she still is stiff competition for the country stars in their 20s.

Bringing forward old Hollywood glam in audio form, she sets a standard so high that I almost want to think she can’t surpass this with her future endeavors.

Kellie is also a stunning fashionista, check out a gorgeous look here >>

OK, so now that I have hyped the track enough, please just do yourself a favor and listen to it. Pickler has the appeal to both the older country fans and the younger crowd, and it’s too good to miss! Pickler will be on The View on Nov. 26 if you want more updates on her burgeoning career.