Shailene Woodley is Divergent. The actress headlines Summit Entertainment’s latest novel adaptation and, judging by its trailer, it could be the next big thing. 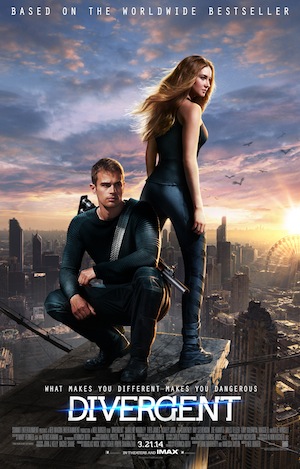 Is Divergent the next Hunger Games? The Jennifer Lawrence vehicle is still top dog, but Divergent offers some fierce competition. Summit Entertainment has released the first trailer for the film featuring Shailene Woodley as a new kind of heroine.

Woodley stars as Tris Prior and she’s no Katniss Everdeen. Tris isn’t forced to fight to the death against her peers, but she does live in a futuristic world ruled by conformity. Her society is divided into various factions that’s based on personalities.

Once you reach a certain age, everyone has to take a test, which helps place you into your right group. Anyone who doesn’t have a clear placement is seen as a threat.

Unfortunately, Tris doesn’t fit in with any of the factions because she’s Divergent. Because of her ability to decipher between what’s real and fake, she could be labeled an outcast. She must keep her gift hidden because there’s a conspiracy to destroy all Divergents. So she ends up joining forces with rebels who are willing to take a stand against the government.

What do you think of the first trailer for Divergent?