Lily Allen has made a living off slamming pop culture, and this time she took on the state of the music industry. 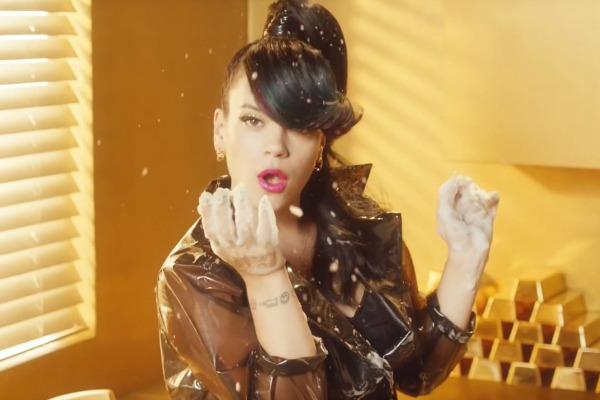 Lily Allen has never been one to shy away from making fun of anyone and everyone she thinks is ridiculous, and the pop world is her latest target. The singer took some time off, mostly to get married and have a couple children, but is back and arguably better than ever.

Her new single “Hard Out There” makes fun of all different eras of pop music, and ends with the most current Miley Cyrus/Robin Thicke/twerking phase.

In the video for the song, Allen includes scenes that can only be described as attempting to look like 1990s rap videos, with dancing women in tight clothes. The women are wearing bras, chains and plenty of g-strings (there may even be a champagne shower involved). Allen heads to the kitchen where she is shining a chrome rim, and at one point suggestively eats a banana.

“I suppose I should tell you what this b**** is thinking/You’ll find me in the studio and not in the kitchen,” she continued. “I won’t be bragging ’bout my cars or talking ’bout my chains.”

Just days after being posted on Youtube, Allen’s video has been viewed nearly two million times. She tweeted about it on Wednesday, you can watch it here.

(Warning: The video is very NSFW, and may contain material offensive to some.)

Allen isn’t the only one criticizing the current state of the pop music industry. Singer Lorde recently made similar comparisons.

Allen’s song makes numerous mentions of the weight requirements in the pop industry and one scene has her getting liposuction.

“How does someone let themselves get like this?” her manager asks.

Jennifer Lawrence won’t let Hollywood put her in a box >>

1. If anyone thinks for a second that I requested specific ethnicities for the video, they’re wrong.

2. If anyone thinks that after asking the girls to audition, I was going to send any of them away because of the colour of their skin, they’re wrong.

3. The message is clear. Whilst I don’t want to offend anyone. I do strive to provoke thought and conversation. The video is meant to be a lighthearted satirical video that deals with objectification of women within modern pop culture. It has nothing to do with race, at all.

4. If I could dance like the ladies can, it would have been my arse on your screens; I actually rehearsed for two weeks trying to perfect my twerk, but failed miserably. If I was a little braver, I would have been wearing a bikini too, but I do not and I have chronic cellulite, which nobody wants to see. What I’m trying to say is that me being covered up has nothing to do with me wanting to disassociate myself from the girls, it has more to do with my own insecurities and I just wanted to feel as comfortable as possible on the shoot day.

5. I’m not going to apologise because I think that would imply that I’m guilty of something, but I promise you this, in no way do I feel superior to anyone, except paedophiles, rapists murderers etc., and I would not only be surprised but deeply saddened if I thought anyone came away from that video feeling taken advantage of, or compromised in any way.