Castiel has proven he’s got what it takes to make it as a human. But if he could get his wings back, would he do more good (and be happier) as an angel or a human? 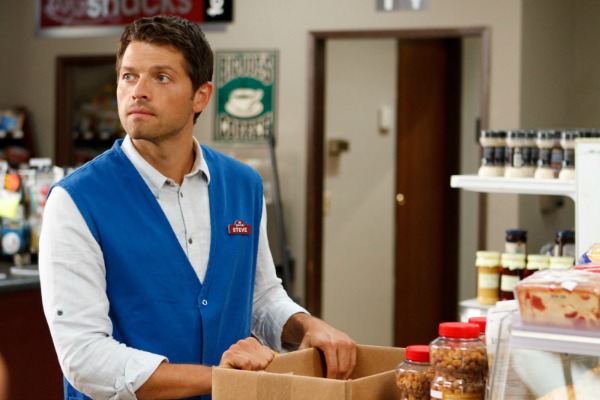 On this season of Supernatural, Castiel (Misha Collins) has been going through quite a rough journey. At the end of last season, Metatron stole Castiel’s grace so that he could do a spell that would cast all of the angels out of Heaven. You would think that having a bunch of angels here on earth would be a good thing, but nothing on Supernatural is quite what it should be and the “winged freaks” (as Dean affectionately calls them) are causing their fair share of trouble.

Dropped on earth as a mere human, Castiel has spent this season struggling to come to terms with that humanity. At first, he was just a naive angel and that naivety nearly cost him his life when he fell for a very bewitching Reaper tasked with killing him. Even his supposed rescue by the Winchesters didn’t work out when Ezekiel (who is currently taking up residence in Sam to heal the younger Winchester after the Trials) demanded that Dean turn Castiel away from the bunker.

In the most recent episode, “Heaven Can’t Wait,” it was revealed that Castiel was slowly starting to figure out how to be a human. He had gotten himself a job and claimed that it was giving him the dignity that he hadn’t gotten in his recent years as an angel. But though he tried to hide it, the angel Ephram felt Castiel’s pain from miles away. So while Castiel may have gotten the knack of being human, should he stay that way?

Castiel should remain a human

Right now, the idea of Castiel getting back his grace hasn’t even been broached on the show. But if Castiel could get his grace back and go back to being a full-fledged member of the winged mob squad, the question would be: Should he do it? Castiel doesn’t exactly have the best track record when it comes to being an angel. In recent years, it seemed like the harder he tried to do the right thing, the more things blew up in his face. The poor guy has been the cause of massive amounts of death and destruction. Perhaps being a human is better for him. As was seen in the latest episode, Castiel doesn’t necessarily need his powers to be useful. As Dean said, you don’t need powers to be a hunter, and if Castiel accepts his humanity, he could end up a bigger help than he ever was as an angel.

Castiel should return to being an angel

Though he’s learning to be human, there’s no doubt that Castiel is suffering pain because of his plight. All he’s ever wanted to do was help (people and angels alike) and that’s definitely harder without his grace. He doesn’t have the ability to heal with the touch of his hand or use his strength to keep his friends safe. If Castiel were to become a full angel again, he would also undoubtedly be able to help those of his brothers and sisters who have fallen. Castiel may seem as though he barely understands humans, but compared to the other angels, he’s an expert on humanity. At the very least, he could help them to stop being so destructive, even if he couldn’t figure out a way to return them to Heaven where they belonged.

What do you think? Vote in our poll and weigh in with your opinion!