As rumors swirl that Britney Spears barely sings on her own album, her backup singer is forced to address the accusations that she is the voice behind the music. 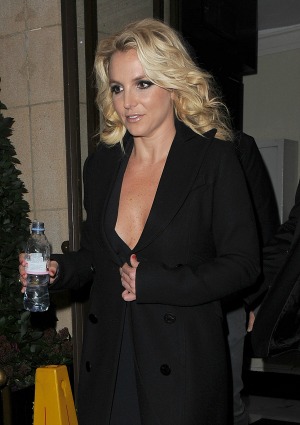 It’s obvious that Britney Spears lip syncs through most of her live performances, but is she faking it on her albums, too?

Some fans are crying foul after hearing what they say is a distinct switch between Spears’ own voice and that of one of her backup singers in a track from her new album Britney Jean.

Angry listeners tweeted their suspicions that Myah Marie, one of Spears’ backup singers both live and on her albums, is doing most of the heavy lifting on a leaked track from the pop icon, “Passenger.”

And it is not the first time this rumor has floated around. Marie’s own father said last February that his daughter sang in place of Spears.

“My daughter sings for Britney Spears. The truth is, Myah can sound just like her. She has a knack,” Murray Langston told Star magazine.

“Maybe Britney doesn’t know whose voice is on her album and it doesn’t even interest her,” he suggested. “Maybe she just comes in, lays down the track and leaves, and doesn’t care.”

Work it! Britney Spears says being sexy is her job >>

“As I told [Britney fan site] Breatheheavy.com in February, while I am so grateful for the opportunity to provide background vocals for Britney Spears on a small number of her most recent works, I most certainly cannot take credit for her tremendous talent as a singer,” she told Radar Online in a statement. “She is a veritable ‘living legend’ with a longstanding reputation for excellence in all aspects of her artistry. She is my idol and I have nothing but the utmost respect and admiration for her. I have no further comment.”

The haters have done nothing to dissuade Spears in her enthusiasm for her latest work, and the singer even released the full track list from the upcoming album on Twitter today.

The album includes a surprise duet with her sister Jamie Lynn Spears, who has been trying to drum up a career in country music since the birth of her daughter Maddie.

Tell us: Do you think Britney Spears is faking it?