Did he cheat and cover it up or does Alec Baldwin really have a creepy stalker? The first day of the case is dramatic and theatrical. 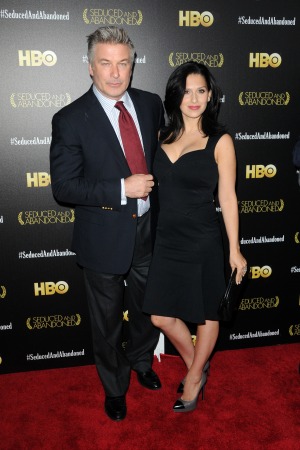 Did Alec Baldwin sleep with his stalker? That’s what the 30 Rock actor’s former friend Martin Bregman is claiming. Baldwin, the Scarface producer and Baldwin’s stalker Genevieve Sabourin were all in court on Tuesday to talk about the bizarre tale.

The French-Canadian actress is charged with 23 counts of harassment and one count of stalking against the MSNBC talk show host. However, the 41-year-old alleges that she was Baldwin’s lover at the same time he was courting his now-wife Hilaria.

According to the New York Daily News, Sabourin sent him over 100 emails and texts trying to get the actor to marry her and “conceive a mini Baldwin.”

Her lawyer, Todd Spodek, refuted that claim stating in court, “She never had the intent to harass, annoy, alarm, stalk or cause any inconvenience to Mr. and Mrs. Baldwin. She merely sought closure for a crumbling romantic relationship.”

The accused stalker also has Bregman on her side. The 87-year-old producer told the New York periodical, “He’s lying. He was screwing two women. One of them is his present wife and the other one, I presume, he was doing the girl in question.”

Since Baldwin didn’t want to get caught by Hilaria, Bregman theorized that he went to the police with the harassment report.

Adding a third side to the story, Baldwin testified that he met Sabourin in 2002 on the set of The Adventures of Pluto Nash. She was introduced to him as Bregman’s “mistress.” Bregman, who is also married, used Baldwin as a cover for his affair with the Canadian.

The 55-year-old actor took the stand and proceeded to break down over the allegations and denied they ever had an affair.

Sabourin proceeded to scream out in the courtroom, “I gotta prove that I had a sexual relationship. I didn’t do anything wrong. He’s lying! He’s lying!”

The theatrics continued when Baldwin’s wife took the stand and talked about the woman tweeting her from the account @Scarfacemadam. Things escalated even further when the alleged stalker showed up at the couple’s residence on April 8. That’s when the cops became involved in this case.

It’s hard to believe it was only the first day of the case. This might be better than any reality show on TV.