Jennifer Lawrence is one tough cookie. She’s comfortable in her own skin and refuses to subject herself to any ridiculous standards of beauty. 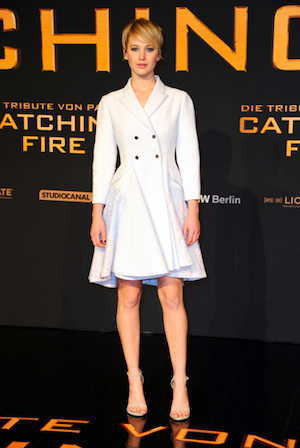 Jennifer Lawrence is the gal pal we always wanted. She’s like a breath of fresh air in a stuffy room. The Oscar-winning actress is no stranger to telling it like it is, especially when it comes to the media.

According to People, Lawrence recently spoke out about body image and the sexualization of women in entertainment. “Sex sells, and for some disgusting reason, young sex sells even more,” she said.

But she’s not here to pass judgement on women who freely shed their clothes on the world’s stage. When the topic of Miley Cyrus came up, Lawrence took the diplomatic approach.

Lawrence has become a role model for millions of girls due to her role in The Hunger Games. The film franchise is an international hit that centers on a powerful young woman who uses her wit to survive. When she was cast as Katniss Everdeen, she purposely refused to lose weight for the part.

She told the BBC, “When we were doing the first The Hunger Games, it was a big discussion, ’cause it’s called The Hunger Games — she’s from District 12, she’s obviously underfed, so she would be incredibly thin. But, I just kept saying, ‘We have the ability to control this image that young girls are going to be seeing.”

She continued, “Girls see enough of this body that we can’t imitate, that we’ll never be able to obtain, these unrealistic expectations, and this is gonna be their hero and we have control over that.”