Fox’s new comedy Dads has been getting slammed by critics, but we’ve got five reasons why you should give it a shot. 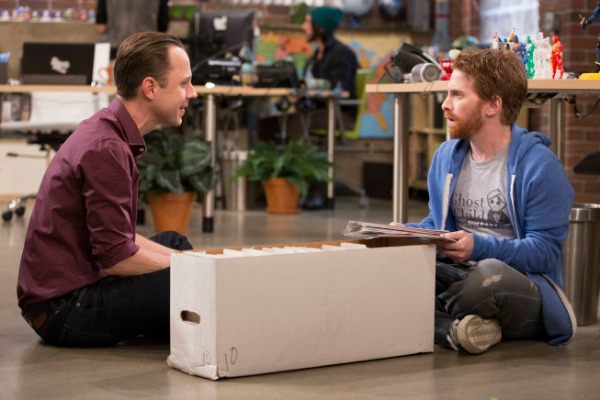 I should start this article by making a confession: I’m not usually a comedy person. For years, I have watched almost nothing but dramas and supernatural/fantasy on TV. I don’t really know why I avoided comedies. After all, I love to laugh and I crack up all the time when watching my favorite shows (you’d be surprised how many “dramas” are actually chock-full of laughs).

How I Met Your Mother‘s Barney meets The Mother >>

A few rare comedies would make it through, such as 2 Broke Girls, Modern Family and the short-lived The Goodwin Games. But for the most part, my DVR was devoid of anything funny. This season I made a conscious effort to change that and added almost every new comedy that from all of the networks’ lineups.

I have a lot of favorites out of those new additions, but one has stood out — not necessarily because it’s better than all the rest, but because it sure has gotten more bad press than all of them put together. I don’t know why Dads has garnered so much hatred, but I’m here to tell you that it’s definitely not as bad as some people have made it out to be. In fact, I’ve got five whole reasons why I think everyone out there should give it a shot.

If you haven’t heard already, Dads is about two guys in their mid-30’s who, for many and assorted reasons, suddenly find that their dads have to move in with them. The main premise is rife with comedic opportunities, but if that’s all there was, the show wouldn’t be nearly as good as it is. The truth is that there are a lot more situations that bring on the laughs, including the boys’ work environment (they run a video game company and have a hilarious co-worker), their home lives (one of them is a confirmed bachelor and the other a married man with children who’ve yet to be seen on-screen), and the people who surround them (a wife, a cleaning lady, the above-mentioned co-worker).

When you add all of the above to situations such as the guys and their dads having a contest to see who can smoke the most pot without losing it and one of the guys getting his doctor’s finger stuck up his rectum for an entire episode, perhaps you can understand why I think it’s one of the funniest shows I’ve seen in a while.

15 Reasons why New Girl‘s Nick is the perfect guy >>

Beside the fact that they’re both similar in height (I happen to like short guys so this is just a bonus for me), Giovanni Ribisi and Seth Green make a fantastic comedic pair. On-screen, their characters play off each other so beautifully that I can only assume that they get along well offscreen. Ribisi’s Warner is wonderfully conservative and yet ends up in the most ridiculous predicaments, and while Green’s Eli is a bit wilder than his buddy, he’s not immune to the embarrassment that his father seems to get great joy in bringing out.

Come on, need I really say how spectacular these two actors are? We’re talking about comedy legends here and if you think that their talents are wasted on this show, you’re sorely mistaken. Mull plays Warner’s father with a perfect mix of cluelessness and naughtiness. Every time I think Crawford couldn’t get any dumber, it turns out he was playing everyone one in the room. Riegert’s David is cold and heartless, but that is most definitely part of his charm. Though I’ve tried with all my might, I simply cannot hate the man, even when he says and does the most despicable things.

4. It just got a full season order

Fox recently gave Dads a full-season order, which means that they’ve obviously got enough faith in it to keep it on the air, despite what some reviews have been saying about it. What that means for you, dear reader, is that you’ve got time to catch up and get to know all of these characters. It also means that the show will have even more time to flesh out the characters and their story. Many shows that have floundered in the ratings in their first season have become hits in their second season and Dads could be set to do just that.

While I’ve talked a lot about the men on Dads, there are a few ladies that deserve some credit as well. First of all, there’s Veronica (played by Brenda Song), who works with Warner and Eli at the video game company. Though it might seem at first that she’s just there to be the butt of a few jokes, she gives back what she gets, and then some. As Warner’s very understanding wife, Camilla, Vanessa Lachey is adorably hilarious. Finally, there’s Edna (Tonita Castro), who was initially just Eli’s housekeeper and has evolved into a big part of the show. Edna isn’t afraid to take on Eli’s dad and their confrontations have made for some of my favorite moments on the show.

What do you think? Are you going to give Dads a shot?