She hails from Hollywood royalty and is one of the most celebrated romcom stars of her generation — so why is Kate Hudson crying poor? 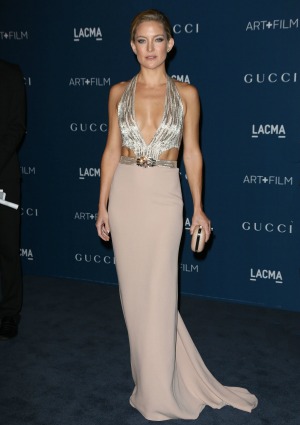 Kate Hudson a huge star in her own right and hails from a family of Hollywood royalty — mother Goldie Hawn and stepfather Kurt Russell are household names. You wouldn’t think she’s hurting for dough. So why can’t the poor girl buy tons of gorgeous designer gowns like we all imagine she does?

A regular on best-dressed lists, including nabbing the cover of Harper’s Bazaar‘s Best Dressed issue this month, Hudson says the idea that celebs are dripping in designer duds on their own dimes is far from reality.

“People think we own all these dresses,” she told the magazine. “But we borrow them! I can’t afford to buy that stuff. There are certain things I splurge on, but it’s very rare, especially when you have two kids and school tuition.”

“I’m not a big high-end fashion shopper,” she explained. “I wish I could but the truth is things are just so expensive. Before Isabel Marant was a million dollars and famous, I used to go to her store in Paris and go crazy, it was so affordable.”

But good news! Marant is about to release a designer collaboration with H&M! So Hudson will totally buy that up, right? Wrong — because she wasn’t raised that way.

“My mom wasn’t a big shopper for us,” the mother of two explained. “I think they wanted to instill that in us even though we grew up in a really privileged and lucky lifestyle.”

The actress, who just cofounded a line of athletic wear called Fabletics, wants to enable women to get great looks at great prices.

“I really think that if I’m going to put my effort into something, I want to reach a larger amount of women, where they can afford the things I’m selling. Especially with the economy, it doesn’t make sense to me anymore.”

Read the complete interview with Kate Hudson in the December issue of Harper’s Bazaar.

How Kate Hudson saved Lea Michele during her darkest days
Kate Hudson’s son wants a new daddy
Are Kate Hudson and Matt Bellamy ever getting married?