Kelly Clarkson has been in a whirlwind romance with her love Brandon Blackstock. Less than a month after they were married, she hints a baby could be on the way. 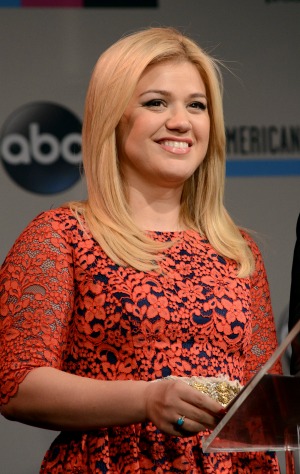 Kelly Clarkson was married just weeks ago, but it looks like the newlyweds are already looking to start a family. The singer appeared on The Tonight Show with Jay Leno and talked about her and husband Brandon Blackstock’s valiant efforts to get pregnant.

“[We want a baby] like now! Practice makes perfect! We do, we do. We’re trying, trying, trying,” Clarkson excitedly told Leno (via Us Weekly), to which he quickly responded, “Are you pregnant right now?”

The 31-year-old singer started laughing and responded, “What are you saying?”

“I always get this: stars that come and go, ‘I’m thinking about having a baby,’ and then the next week they go on Ellen and announce it there,” Leno explained to the singer. “So, I’m asking you, are you pregnant? Remember, you are under oath!”

Clarkson stopped herself from saying anything for sure, though, leaving everyone to wonder what the real answer is.

“We are not announcing anything right now,” she answered.

Clarkson had previously said she was hoping for a baby (well, a pregnancy) by Christmas, and told Leno they’re sure trying. The American Idol winner and Blackstock have apparently been at it “like rabbits.”

The hope for children is new for the singer, but with the marriage, she quickly became a stepmom.

“I honestly never ever used to want to want kids because I’m kind of selfish with my career, but going to soccer games with Seth and doing homework with Savannah, I just really love it, y’all,” Clarkson recently told 104.3 MY FM. “It’s so cool. It sounds so cheesy but it’s such a bigger point to life. I really lucked out with the whole kid situation. They’re amazing.”

Clarkson released her Christmas album back in October, and the idea of a baby would make her holiday a little brighter.

“Christmas changes, it morphs, it comes to life a little more,” she told USA Today. “It’s just a happier time.”