Miley Cyrus sparked a fresh wave of criticism when she lit up a joint on stage at the MTV EMAs and now she finally responds to the controversy surrounding her. 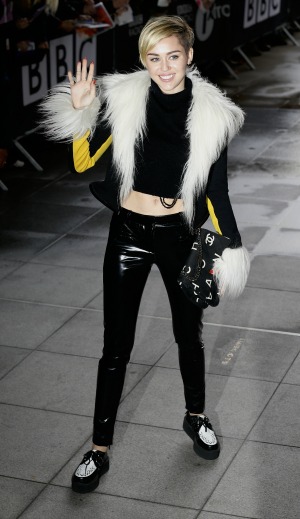 Miley Cyrus has been destroying news feeds once again with her latest publicity stunt and we expect nothing less from the twerker.

The pop singer decided to light up on stage on Sunday night during the MTV European Music Awards while accepting her award for Best Video for her track “Wrecking Ball.”

The stunt sparked a fresh wave of controversy, because it was a very suspicious-looking cigarette… ahem… joint that she chose to light up.

However, the rest of the world appears to be a lot more concerned with the “Wrecking Ball” hitmaker’s behavior than she is. Her response to the marijuana controversy was simple — she doesn’t care.

Cyrus tweeted, “Sometimes in life you just gotta decide to not give AF.”

Guess that makes the Parents Television Council feel a whole lot better about everything? Although, MTV has been applauded for editing out the footage of Cyrus lighting up when it was rebroadcast in the U.S.

Council president Tim Winter released a statement saying, “Last night MTV made a responsible decision and they executed it perfectly. It is unclear whether MTV’s actions suggest stricter content guidelines for its TV-14 programming, or whether this is just an example of the old saying that ‘even a broken clock is right twice each day.'”

“We certainly hope it is the former. We applaud MTV for taking responsible actions to eliminate the drug use from its U.S. broadcast, and we urge them to make that a uniform policy for all of its programming.”

However, that didn’t stop Cyrus from seeking the attention she so badly craves and she tweeted to her fans, “Go online and watch what really went down at the EMAs!”

Is there no stopping this girl? We expect a very similar stint to be pulled again when she performs at the American Music Awards on Sunday, Nov. 24, as well as her Bangerz tour, which kicks off on Valentine’s Day.

What do you think, should Miley Cyrus apologize for her antics?