Tom Cruise was accused of equating his acting job to being at war in Afghanistan after a distortion of his words by opposing lawyers. When directly asked if that’s how he felt, Tom Cruise scoffed, saying, “Oh, come on.” 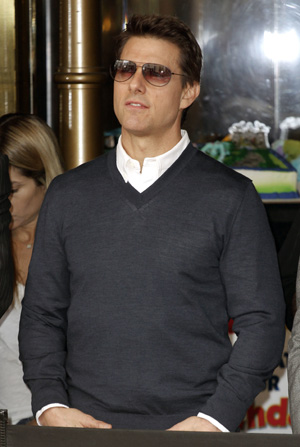 In a videotape of Tom Cruise‘s deposition in his lawsuit against two magazines, he’s seen scoffing at the assumption that his job as an actor is the same as fighting the war in Afghanistan.

The reason the actor made headlines for supposedly equating acting to being a deployed soldier is because his opposing lawyer distorted his words to make it sound that way.

After viewing the video “several times” TMZ reported how the exchange regarding the war comparison went down, showing that Cruise was not actually saying war and acting are the same thing.

“Now, your counsel has publicly equated your absence from Suri for these extended periods of time as being analogous to someone fighting in Afghanistan,” Cruise’s opposing lawyer asked regarding the time Cruise spent away from his daughter Suri after his divorce from her mother, Katie Holmes. “Are you aware of that?”

According to TMZ, Cruise remained unfazed, not showing surprise, nor laughing as his lawyer objected to the question. He was then given the OK to answer.

“I didn’t hear the Afghanistan, but that’s what it feels like,” Cruise said. He then added, “It was brutal, it was brutal,” and gave a slight laugh.

But when the lawyer then asked him, “Do you believe the situations [of being at war and acting in a movie] are the same?” Cruise became irritated and said, “Oh, come on,” totally giving away that he never thought that was an accurate parity.

Apparently, this last question, as well as Cruise’s answer, were not part of the publicly released deposition.

These taped depositions are all part of Cruise’s lawsuit against In Touch and Life & Style magazines, which claimed in two separate articles that the actor abandoned Suri and chose his religion before her following his divorce.