This week on How I Met Your Mother, Barney met our Mother. And it all happened six months before Lily got to her! 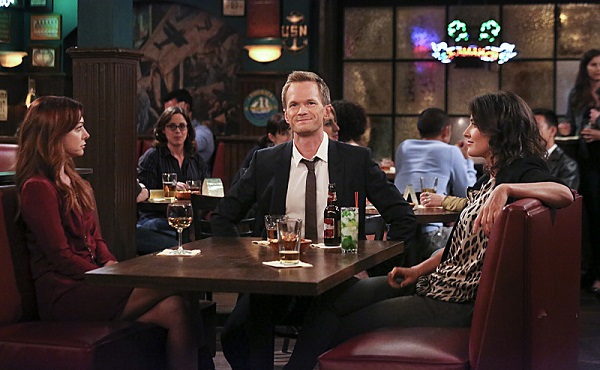 When Season 9 of How I Met Your Mother began, we embarked on a train journey with Lily (Alyson Hannigan) and the woman we all know will someday become Ted’s wife and our Mother. We still don’t know her name, but she’s played by Cristin Milioti and the entire HIMYM fan base is already in love with her.

Aww! That time we interviewed Cristin Milioti and fell in girl love >>

When we witnessed Lily and The Mother bonding on the train, we assumed Lily was the first to meet our long-awaited mom. We (along with the rest of the world) assumed wrong. Honestly, we should have known better. How I Met Your Mother is known for its flashbacks and we’d been promised plenty of those during this final season. Still, we jumped the gun. So, who actually met The Mother first? So far, it looks like the answer is: Barney.

Of course, another flashback may prove differently. But here’s what happened on Monday night on HIMYM:

This week, the gang flashed back to the fall of 2012. According to the show’s creator and EP, Carter Bays, Monday night’s flashback happened sometime between the events that happened in “Splitsville” and “The Tramp Stamp.” During a night at MacLaren’s, Lily and Robin challenge Barney’s “challenge accepted” premises. It seems he mostly only accepts challenges he gives himself and the girls doubt he could complete a challenge created by them. He proves them wrong, though. Not only can Barnibus (Neil Patrick Harris) pick up girls making only dolphin sounds, he can score numbers without ever using the letter “e” and after being nearly sabotaged by Robin.

The final challenge: Pick up some diapers for Marvin and some samosas for Robin… and still pick up a girl. With samosas in hand and diapers tucked under his arm, Barney tries to hit on a girl at the convenience store. That girl? The Mother. Nearly six months before Lily meets her on the train.

The scene is perfect. The Mother immediately turns down Barney and tells him he’s just trying to make up for some unhappiness in his life. Of course, that shakes Barney to his core. Soon enough, they’re sitting on a bench on the street and Barney is spilling his guts to The Mother on how he still loves Robin.

With her pep talk about “playing the game” versus “winning the game,” Barney decides it’s time to win the game by making Robin his forever. The Mother seals the deal by telling him he has to go all out. It has to be his biggest, most thought out play ever. That’s when Barney heads home, opens the playbook and write out his last play, “The Robin.” HIMYM fans will remember it’s the one that took him all season to complete and that ended with Barney proposing to Robin.

In other words: The Mother is the reason Barney and Robin end up together and, most important, the person who accidentally hinders Ted from telling Robin he still loves her. In a way, The Mother sealed her fate to marry Ted six months before she even met him… or Lily. Pretty sweet, right?

Want more TV news? It’s fate! We have a newsletter for that! >>

We also learned that, just like Mosby, The Mother is a hopeless romantic. When Barney asks her how she feels about her boyfriend, she admits she doesn’t think he’s the one. Of course, Barney then proceeds to offer to set her up with a friend, mentally scans his list of single friends and decides he doesn’t know anyone for her and lets her walk off into the subway.

Why do you think Barney didn’t consider setting up The Mother with Ted?