Zoe Saldana surprised everyone by getting married in secret back in June. But she and her new husband stepped out last week, and he had a very familiar tattoo on his arm. 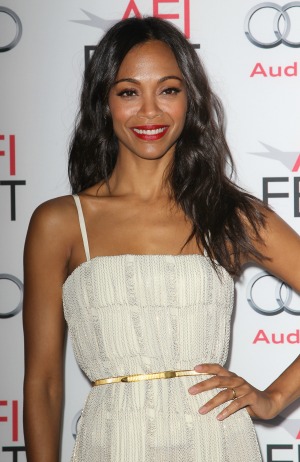 Newlyweds Zoe Saldana and Marco Perego are the picture of love, but it looks like the new groom went an extra step to prove it. The couple appeared together on Wednesday, Nov. 6 in Beverly Hills with Perego sporting what appeared to be a tattoo of his new wife on his arm.

The tattoo looked like a black-and-white portrait of Saldana in an oval frame. Saldana and Perego were married five months ago, in secret (although we didn’t find out about it until September!).

The couple was first spotted out in the middle of May, and a source told Us Weekly they had “known each other for a long time.”

Saldana had dated Bradley Cooper on and off between 2011 and 2012, and was engaged to businessman Keith Britton for 11 years before that.

She told the magazine when she met Perego that she is “thrilled to have someone she can enjoy life with.”

The June ceremony took place in London, and was reportedly “super small but very romantic and beautiful,” according to Us Weekly.

Saldana appeared on a red carpet over the weekend, and flashed her pear-shaped emerald engagement/wedding ring. According to Zaven Ghanimian, marketing director of Simon G. Jewelry, “The current value of the stone should be somewhere between $18,000 to $32,000, depending on the clarity and origin of the stone” (via E! News).

Besides her brand new marriage, Saldana has been staying busy lately. She just finished shooting Nina, Infinitely Polar Bear and Guardians of the Galaxy, and is now voicing a character in an animated film based on Shakespeare’s Romeo and Juliet that occurs during Day of the Dead, called The Book of Life. She is also rumored to be reprising her role of Neytiri in Avatar 2.