Jennifer Lawrence goes into detail describing the woes of wearing a wetsuit while filming The Hunger Games: Catching Fire. 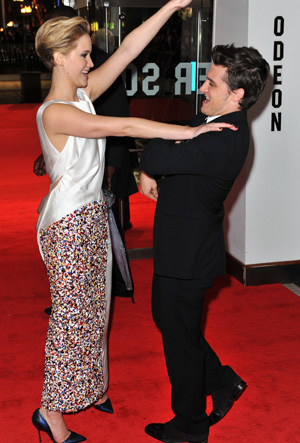 After having spent most of The Hunger Games: Catching Fire filming in wetsuits, Jennifer Lawrence detailed some issues she and Josh Hutcherson ran into while wearing their rubber suits.

While at first Lawrence and Hutcherson thought wearing the tight contraptions might prove to be very uncomfortable, they were somewhat pleasantly surprised.

“Honestly, I was expecting them to be horrible because the idea of being in a wetsuit for a whole movie sounds terrifying,” Hutcherson told E! News. “But they actually were pretty comfortable once we found out you can actually pee through them — just go into the ocean and take care of your business.”

Jennifer Lawrence is an Oscar loser >>

In turn, Lawrence was delighted at the fact that the suit was not overly formfitting around her nether regions. “I was surprised at how little camel-toe problem there was. I was expecting a lot more,” she revealed.

Apparently, according to Hutcherson, they tried out wearing cups under the suits, but they looked “ridiculous,” he said laughing. “Any more questions?” Lawrence added when the subject began to take a slightly inappropriate turn.

Lawrence and Hutcherson’s co-star, Sam Claflin, revealed that in order to avoid “VPL” — visible panty lines — under the wetsuits, the cast was originally asked to wear thongs. “We eventually went with cycling shorts and that kept it all intact.” However, according to Jena Malone, who plays Johanna Mason in the film, some people were just “free-balling it,” not bothering to wear any layers under their suits at all.

10 Hilarious quotes that could only come from Jennifer Lawrence >>

Meanwhile, Lawrence has been rocking her new haircut while doing all the press rounds for Catching Fire and revealed the reason she chopped her tresses off.

“It grew to an awkward gross length,” Lawrence said during an interview with Yahoo. “And I kept putting it back in a bun and I was like, ‘I don’t want to do this,’ so I just cut it off. It couldn’t get any uglier.”