Katy Perry sparked some huge engagement rumors when she sported a big rock on her ring finger at the MTV European Music Awards this weekend. 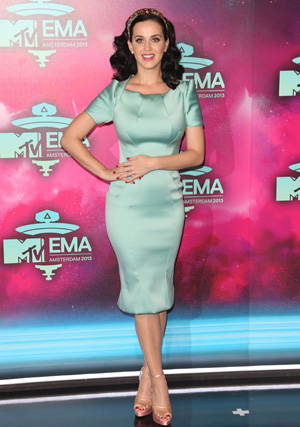 Engagement rumors flew high Sunday night when Katy Perry showed up at the MTV European Music Awards with a shiny rock on her left-hand ring finger.

Decked out in a slim-fitting mint-green Zac Posen dress and pink Charlotte Olympia platform heels, Katy had fans reeling with hope that John Mayer asked her the big question. But reps for both singers have not confirmed the speculation, and at this time it’s believed to be unlikely the lovebirds are engaged.

However, it does seem that Perry and Mayer are not far from taking that big step. According to an E! News insider, “everyone wants them to get engaged,” because “they are so perfect together,” although a proposal may not be happening just yet.

Another source told Us Weekly that right now “it’s just a question of when John will propose.”

Katy Perry is the new face of CoverGirl >>

If a marriage would take place eventually, it would be the second one for Perry, who famously wed comedian Russell Brand and divorced him shortly after in a much-talked about split. Mayer has never been married, although he dated plenty of famous ladies including Jessica Simpson, Jennifer Love Hewitt, Taylor Swift, Minka Kelly and Jennifer Aniston.

Perry didn’t mention the blatant finger bling while on the red carpet, giving nothing away as to her coupledom status. Also, she didn’t wear the ring when she performed onstage at the awards, or even to accept her award for Best Female artist.

Katy Perry tops Justin Bieber in Twitter — but is it real? >>

The famous crooning couple first went public with their relationship in the summer of 2012, briefly breaking up and quickly getting back together again. They’ve even made some music together, with Mayer co-writing Perry’s “Spiritual” off her Prism album, while she lent her singing voice to Mayer’s “Who You Love” on his Paradise Valley album.