Lance Bass is getting wedding-planning help from some very experienced friends, including Jessica Biel. 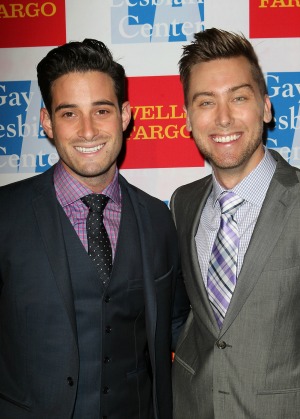 Marriage is taking the *NSYNC guys one by one, and Lance Bass is up next. Chris Kirkpatrick was married last week, and Justin Timberlake and Jessica Biel were married just a little more than a year ago.

Bass proposed to his boyfriend, Michael Turchin, in September — and Bass is just now getting his wedding planning underway. He rekindled some old friendships at Kirkpatrick’s wedding and got some great wedding-planning tips, too.

“I’m so glad I went to Chris’ wedding because I forgot about some of my old management company people,” Bass told Us Weekly. “And then we were sitting there talking to Jessie Biel, too, and she gave us a lot of great pointers. And she had some really great ideas.”

One thing is for sure — Bass and Turchin’s wedding is going to be more fun than basically anyone else’s.

“One really cool idea she had was that, on the invites — because we love our onesies — send out personalized onesies to all our guests so that at midnight after the reception it turns into a pajama party,” he added. “How fun would that be? I think we might be doing that one. That was something we both loved.”

When *NSYNC was at the height of its fame, the five guys in the band were still teens (or very close to it). Bass said attending Kirkpatrick’s wedding made them all revert back to their old ways.

“It’s very immature,” he explained. “We still pretend we’re 16. A lot of old jokes… keep resurfacing. It’s like nothing ever changed.”

“We’ve slowly but surely started planning it,” Bass said. “It’ll be a year from now. But it’s a lot. It sure is a lot.”