She’s at it again! Miley Cyrus brazenly lights up a joint onstage at the MTV European Music Awards. Let the headlines begin… 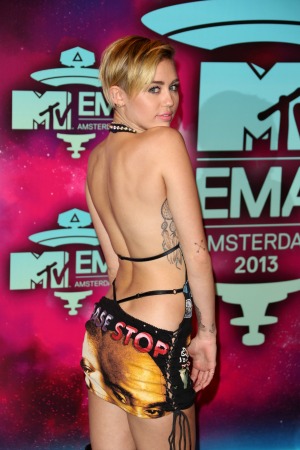 Miley Cyrus is clearly enjoying the laws of Amsterdam while in town for the MTV European Music Awards. She shocked the audience on Sunday night by lighting a joint while accepting an award.

Miley Cyrus is moving in on Paris Hilton’s ex >>

She hit the stage after winning Best Video for her hit single “Wrecking Ball.” Right before she gave her acceptance speech, she lit a joint as she made her way to the microphone.

That wasn’t the only smoking she was doing while at the EMAs. According to an Us Weekly source, the 20-year-old singer was busy with her stash of marijuana backstage as well.

The insider also shared the initial reaction to her public toking, saying, “No one was expecting it to happen. It was so brazen, so shameless. It was so uncalled for.”

Cyrus has talked publicly quite a bit about her love for the drug, but she’s been openly flaunting it while on her trip to Amsterdam, where marijuana is legal.

She even had an interesting exchange with fellow performer Katy Perry on Twitter before the EMAs.

Perry tweeted, “For tonight’s performance of UNCONDITIONALLY on @mtvema? I will be letting the LIGHT in & then making you SHINE! ?#dontneedtobehighforthis?.”

In response, the “We Can’t Stop” singer tweeted, “@katyperry @mtvema but you may want to be.”

While Cyrus isn’t one to shy away from controversy, the former Disney star doesn’t seem to understand that she still has young fans who look up to her.

In her final tweet of the night, Cyrus offered up some advice to her followers while still subtly hinting that toking up a joint is OK. She did that by using several smoke emojis in her tweet.

She wrote, “Stay in school & Be kind. Other than that HAVE FUN”

It’s doubtful that Cyrus is going to back off raising eyebrows and making headlines, so let’s just chalk this up as her latest stunt.