Jessica Simpson is ready to show off her post-baby body to the world. She tweeted out a new photo from the set of her Weight Watchers commercial. 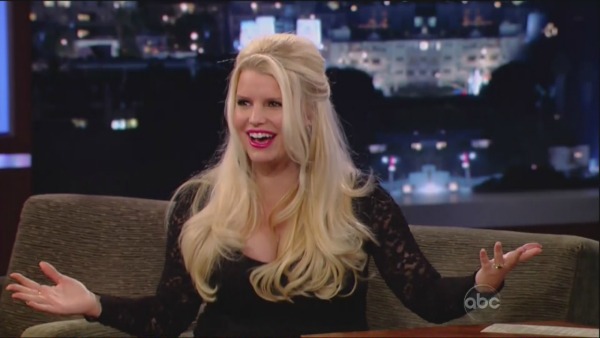 She’s back! After spending a significant amount of time away from the limelight after the birth of her second child, Jessica Simpson is stepping back into the public eye.

On Friday, the mother of two tweeted out a photo to her almost 7 million followers from the set of her new Weight Watchers commercial. Simpson was looking gorgeous in a crisp white shirt and a simple pair of dark skinny jeans tucked into a pair of brown boots.

The 33-year-old looked like a natural country girl in the photo. She seemed thrilled to be back endorsing the company that helped her lose the baby weight from her first pregnancy with Maxwell.

Her second pregnancy seemed a bit easier than the first one, when the former Fashion Star judge was scrutinized for the 70 pounds she gained over nine months.

She told Parents magazine, “My pregnancies (especially my first with Maxwell) were well-documented and my struggles with my weight and body image have played out in front of the world. As hard as that has been, the hardest part is to realize that with all the hurtful and harsh criticism from others, I have been the hardest on myself.”

After Ace’s birth in June, Simpson spent time with her growing family and did not rush back to work. The time off did her good.

She spoke with confidence to Tumblr’s MomsFeed blog, saying, “With a toddler on the run and an infant to look after I knew I needed a plan that’s simple and fits into my life, along with the support that’s so important to my success. I know Weight Watchers works, so I got on the plan again.”

We think you look amazing, Jessica!